With another huge year of rugby looming, we take a look at 19 players to keep an eye on in 2019.

Ma’a Nonu
All Blacks legend Ma’a Nonu makes a surprise return to New Zealand rugby to chase an elusive Super Rugby crown when he turns out for the Blues in 2019. Although he will turn 37 during the 2019 competition, Nonu remained at the top of his game for Toulon until his departure in 2018 and comes into the season in sublime physical shape. A world-class performer and double Rugby World Cup winner, Nonu will add plenty on and off the field to the Blues in 2019.

QUICK TAP: THE TOP 10 MOMENTS FROM THE 2018 SEASON
Kendra Cocksedge
There will be plenty of eyes on Kendra Cocksedge in 2019 after the talented halfback became the first woman to ever win the Kel Tremain Player of the Year Award at the ASB Rugby Awards in December. A key part of Canterbury’s Farah Palmer Cup success and the Black Ferns series win over Australia, Cocksedge will be looking to lead Canterbury to a three-peat of FPC titles and continue to elevate her game on the world stage with the Women’s Rugby World Cup in New Zealand now just two years away in 2021.

Salesi Rayasi
With standout performances for the All Blacks Sevens on the world sevens series and for Auckland in the Mitre 10 Cup, 2018 was a breakout year for 22-year-old speedster Salesi Rayasi. The 105kg outside back was rewarded with his first ever Super Rugby contract with the Hurricanes in 2019. A potent finisher and dangerous counter attacker, Rayasi’s style will mesh perfectly with the Hurricanes expansive and fast-paced game plan. If Rayasi’s opportunities are limited at Super Rugby level given the Hurricanes depth on the wing, expect plenty of fireworks at Mitre 10 Cup time from Rayasi.

Rieko Ioane
With 22 Test tries to his name since making his All Blacks debut in late 2016, Rieko Ioane has quickly built a reputation as one of the world’s most dangerous outside backs. The flying 21-year-old has already shown that he loves the big occasion and it doesn’t get any bigger than the Rugby World Cup. If the All Blacks are to lift a third straight Rugby World Cup title, expect Ioane to be in the thick of the action – and at the top of the try-scoring charts.

Dhys Faleafaga
St Mary’s school leaver Dhys Faleafaga has the rugby world at her feet – having finished school in 2018, she starts this year by attending both the Black Ferns Sevens Development trial and the Black Ferns Emerging Players camp. Touted as a future star in both forms of the game, expect to see Faleafaga dominant for the Wellington Pride in the Farah Palmer Cup, and we may well see her in a black jersey before the year is out.

Niko Jones
A schoolboy standout in 2018, Niko Jones is set to make his mark in both sevens and fifteens in 2019. After leading St Peters College to the national schools title last year, the talented loose forward picked up a NZ Sevens contract and signed a two-year deal with Auckland rugby. Boasting many of the same game-breaking attributes of his father Sir Michael Jones, Niko will relish the open space in the sevens game and thrive in the physical battle in fifteens.

Bryn Gatland
With no Lima Sopoaga in the Highlanders squad this year, talented pivot Bryn Gatland has the chance to make the number 10 jersey his own. The classy playmaker has shown flashes of brilliance at Super Rugby level for the Blues and excelled in the Mitre 10 Cup for North Harbour. An extended run at first five-eighth for the Highlanders could see Gatland take his game to the next level – and lead the Highlanders into the playoffs.

Ardie Savea
A player that seems to get better and better each year, Ardie Savea is poised to be a key part of the All Blacks 2019 Rugby World Cup campaign. Having proven himself as an impact player from the bench for the All Blacks, Savea was just as effective when given the starting seven jersey following Sam Cane’s neck injury during the Rugby Championship. Expect no change to Savea’s full throttle style of play as he embarks on the biggest season of his career to date.

Scott Gregory
With trademark blonde curls, Northland’s Scott Gregory is set to become a regular on the Sevens World Series. Debuting for the All Blacks Sevens in December, Gregory was quick to impress with his ability to break the line, read the game and gritty determination on defence. Also look out for the youngster who is eligible for New Zealand Under 20 selection again and will no doubt star in the Northland backline in Mitre 10 Cup.

Krysten Cottrell
A dynamic playmaker and accurate goal kicker, first five-eighth Krysten Cottrell will be looking to continue her hot form into 2019. At Farah Palmer Cup level, Cottrell was one of the best for the Hawke’s Bay Tuis with 52 points in just five games. Cottrell also shone across five Tests for the Black Ferns and will square off with Victoria Subritzky-Nafatali for the Black Ferns number 10 jersey in 2019.

Sione Molia
The 25-tournament veteran of the All Blacks Sevens came into his own during the 2017/18 season and was a key component in the team’s huge success. Molia’s sublime footwork creates opportunities on the field for himself and those around him, while he is accurate and physical on defence. After the first two rounds of the current series, Molia leads the DHL Performance Tracker as top player on the Series.

Risaleaana Pouri-Lane
At only 18 years of age, Risaleaana Pouri-Lane already has an impressive list of achievements to her name having led the New Zealand Sevens team to Youth Olympic Games gold and making her debut for the Black Ferns Sevens in 2018. The Motueka product is set for a big 2019 as she continues to develop her game and vie for a regular position in the Black Ferns Sevens traveling squad.

Solomon Alaimalo
A scintillating counter-attacker and potent finisher, fullback Solomon Alaimalo is set to provide the spark in an exciting Chiefs backline in 2019. Alaimalo topped the Chiefs attacking statistics last year and will be eager to give the All Blacks selectors a reminder of his abilities in a Rugby World Cup year. With Damian McKenzie in the pivot position and Alaimalo at the back, expect the Chiefs to create plenty of attacking magic in 2019.

?? You are going to have to go a long way to see a better try assist than this! How dangerous do you think Shaun Stevenson and Solomon Alaimalo will be for @ChiefsRugby 2019? pic.twitter.com/ilpp4SHCoo— Super Rugby (@SuperRugbyNZ) December 18, 2018 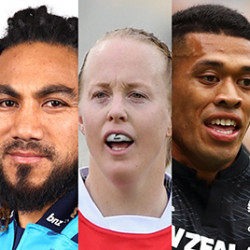