Apia offered a hint of the future for the Blues A late win achieved with an eye to the future was the big benefit from the Blues' foray to Apia on Friday where they beat the Reds 34–29 to continue the Investec Super Rugby misery for Australian sides against their New Zealand counterparts.

Blues coach Tana Umaga said it had been a deliberate decision to give younger players in the squad a chance and they had received some big minutes in the game.

QUICK TAP: NZ UNDER 20'S NAMED TO FACE ITALYIt had also been a chance to give more experienced players who had been hampered by injuries game time as well while building depth for the future – which is all that is left in the Blues season now that they are out of play-offs contention.

Umaga said it had been a big call to play a game in Apia but was one he was very happy the Blues made.

"We got the result we wanted in the end," he said.

It had been significant to come back to the country where his parents were born to play the game. It had shown that Apia had the facilities and he hoped it wasn't the last game that was played there.

Captain James Parsons thought the game had been good for 'growing the younger players who haven't had a lot of opportunity' during the season. They had worked hard behind the scenes to get the chance.

Parsons said Rene Ranger and Kara Pryor deserved special mention. They had been around a while but they took their opportunities with both hands.

"Rene's pick-up off that kick-off, those are match sealing moments and he executed them under pressure and with confidence," he said.

The experience of playing in Apia had been a big focus for the side, because of the contribution Samoa had made to the Blues franchise, and which they were continuing to do.

"It meant a lot to a lot of our players who do have Samoan heritage. We hope we have done that with a performance we can be proud of and they have enjoyed. I think it was a good spectacle on the night.

Parsons said the chance to play the British & Irish Lions was one of the big reasons he had stayed around for 2017.

We get the 'W" in the first-ever Investec Super Rugby match in Samoa #BLUvRED pic.twitter.com/dw8iy7mDn2— The Blues (@BluesRugbyTeam) June 2, 2017 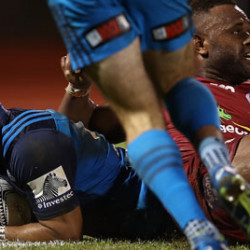