Blues round out last warm-ups with win Blues players, and their long-suffering fans, got a boost in Mangatainoka on Saturday when they beat the Hurricanes 38-31 in their final Investec Super Rugby warm-up game on Saturday.

Whether it is the dawn of a new era under coach Leon MacDonald or another of the false dawns the side has suffered for several seasons, remains to be seen.

QUICK TAP: TAUFUA SETS OUT ON FINAL CRUSADERS CAMPAIGN
But in coming back from a 0-14 margin following tries by James Blackwell and Ben Lam, and a long period of defence, to level the score at 14-14 at halftime, through hooker Leni Apisai and then, after the hooter Hoskins Sotutu, they showed some welcome composure under pressure.

The player being most watched in the side to see if he retains some of his former skill, second five-eighths Ma'a Nonu turned on the action in the second half.

After Melani Nanai scored the first of two tries in the game, Nonu was on hand when flanker Matt Matich broke the line before handing on to Nonu, who beat a man to race 30m to score. Harry Plummer also scored for the Blues while Asafo Aumua, Ben May and Wes Goosen all crossed for the Hurricanes.

The Chiefs beat the Reds 21-19 at Ballymore in Brisbane on Friday. The game went down to the wire with the Chiefs securing the win in the face of determined attacks from the Reds in the dying stages of the game.

?? "When I saw him doing that freakish offload, I was like what is he doing?" - @BluesRugbyTeam players react to a piece of SBW magic from last season.

The teams scored three tries each.

Reds coach Brad Thorn said: "We worked hard for a loss. Obviously, the scrum had some dominance…and our defence had some good grit there."

Shaun Stevenson and Bailyn Sullivan each scored tries to give the Chiefs a 14-0 lead only 10 minutes into the game. After the break Harry Hoopert opened the scoring for the home team. Tate McDermott scored after a quick tap penalty close to the line caught the Chiefs by surprise.

However, the Chiefs responded immediately with Tyler Campbell scoring. Ruan Smith followed that with a try for the Reds which was unconverted.

In Southbridge, the Crusaders had fullback Will Jordan to thank for a 78th minute match-winning try to give his side a 43-38 win over the Highlanders on Friday.

Tries to Tim Bateman and Jordan Taufua gave the Crusaders a 14-7 lead at halftime, and then Tom Sanders grabbed a pair of tries to which the Highlanders responded with a brace from midfielder Sio Tomkinson. Manasa Mataele and Mitchell Dunshea added to the tally.

Josh McKay scored late for the Highlanders, after Liam Coltman, James Lentjes and Folau Fakatava had scored earlier to suggest the Highlanders might be good to retain the Farmlands Cup, but then on the back of a break by Taufua, Jordan had the final say to give the Crusaders the win. 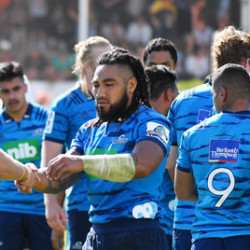