Boost for Blues ahead of tough run home Ending an eight-year inability to beat the Chiefs, the Blues were given a lift before the daunting prospect of taking on the Crusaders in their next Investec Super Rugby outing in Christchurch at the weekend.

The 23-8 win over the Chiefs at Eden Park on Saturday provided a bonus point as the side contemplates their last section of the season against the Crusaders, the Bulls, the Reds and the Hurricanes.

QUICK TAP: CHIEFS WILL KEEP ON FIGHTING - COOPER
Coach Leon MacDonald said he had been saying for several weeks that a good result was not far away and Saturday's result felt good because the management had seen the effort on the training field and they knew it was in the team to achieve success.

But it was well into the game before the Blues got their rhythm.

"It showed signs of last week, especially in that first 20 minutes but we just kept at it and at it and got there in the end.

"We scrambled well, when it was their turn to attack we really held them, didn't give away too many basic penalties other than the one at the end probably. But we weren't letting them in and we grew in confidence as we felt we were suffocating their defence and then, with that confidence, we got excited about getting the ball in our hands and we made the most of it," he said.

ROUND 1?5? | Following some shock results last weekend, how hard will it be to predict this round? ??‍????‍??#RaiseTheStakes pic.twitter.com/83vMgPgbWA— Super Rugby (@SuperRugbyNZ) May 19, 2019

That first quarter had been a concern especially because they had put in a lot of work in that area after the Hurricanes game.

"We were hoping for a bit of reward but it just wasn't happening for us but we persevered and I think in this competition it's how you respond to the setbacks.

"Last week we didn't respond well but this week we scampered back and defended our line and we got away without giving away a try and all of a sudden it was our turn again," he said.

MacDonald said while it hadn't been a perfect performance there was no doubting the Blues' effort in their scrambling play and he thought the defence and recovery was fantastic.

The bonus point had been an extra satisfaction and good reward for the forwards. They had put in the effort under their own posts with two or three minutes to go. Then they got a penalty, a maul penalty and then kicked to the corner for a try from the lineout maul.

"The forwards just took over the last three minutes and owned it and when you've got two of the props that played 80 minutes, for them to be able to do that is pretty impressive," he said.

The fact the props had played the full 80 minutes was due to losing Karl Tu'inukuafe just before the game but even with the amount of time required, prop Ofa Tuungafasi had been the first forward to the last lineout. The hard work he had been putting into his fitness was obvious, he said.

While Tuungafasi's try was the subject of debate, especially in the Chiefs camp, MacDonald said he hadn't looked at it closely but if it was doubtful the Blues had had to put up with calls going against them this year and would take the change in fortune. But at the same time he felt they had deserved the try with their set-up and it was good reward.

MacDonald was also pleased with the effort of first five-eighths Harry Plummer and the way he controlled the game. But he added they were happy with both he and Otere Black. They were different players but Plummer had brought his aggression with effect.

The @BluesRugbyTeam playoff hopes are still alive after their 23-8 bonus point win over the @ChiefsRugby at Eden Park! 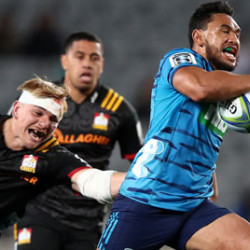