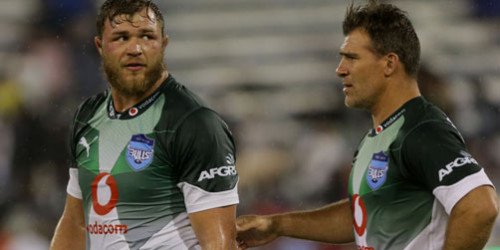 Preparing to face the Crusaders at Loftus Versfeld on Saturday (NZT), the Bulls have welcomed Springbok Schalk Brits back to their Investec Super Rugby side after the completion of his four-week suspension.

Another Springbok, lock Jason Jenkins has also returned to the side after recovering from an injury.

QUICK TAP: ROOKIE WATCH: TOP PERFORMERS IN ROUND 12
Jenkins will partner RG Snyman at lock while Jannes Kirsten will play on the blindside flank after Hanro Liebenberg was not considered due to injury. Duane Vermeulen will play No.8 as the Bulls look to contest the Crusaders' lineout competitiveness.

Coach Pote Human said: "Schalk has been itching to play for the last couple of weeks and he will be very keen. Jason also recovered well and looked very sharp in training.

"Both are players of international standard, so it is great to have them back. Our pack will need to step up to the plate if we want to contain the Crusaders, and these two are certainly capable of adding to that."

Captain Handre Pollard recognised the need to perform well in the remaining weeks of the competition.

?? EXTRA TIME | Following 2? draws in round twelve of Super Rugby, Piri Weepu and @jptocker dissect all the action and make a call on the best tries and moments from the week!#RaiseTheStakes pic.twitter.com/wXkvi8AltW— Super Rugby (@SuperRugbyNZ) May 7, 2019

"We travel overseas after this and will only be back at Loftus next month, so this is a very important match for us. We need to do well here in order to maintain our log position and to get some momentum for the tour. Everyone realises what is at stake," he said.

Tight-loose forward utility Kirsten said: "The Crusaders are No.1 on the points table, and they are the best team in the competition so far, and you want to measure yourself against the best.

"The Sharks showed that the Crusaders could be beaten and if the forwards can lay a good foundation for the backline then we stand a chance.

"We have a few plans for them which would hopefully put pressure on them, and hopefully we can finish better than against the Waratahs," he said.

Other changes in the side see Andre Warner start at halfback with Burget Odendaal at second five-eighths after recovering from an injury.

We wish you all the best with your recovery @bensmithotago! pic.twitter.com/EYSz5PZeEy— Super Rugby (@SuperRugbyNZ) May 7, 2019 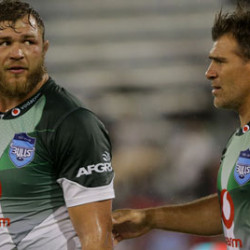