With the Investec Super Rugby title race heating up, an 11-year try scoring record is under serious threat from both the Chiefs and Crusaders.

QUICK TAP: LIONS LOOK TO DERAIL NZ SUPER RUGBY HOPESBoth teams will have a minimum of two games and maximum of four games left to break the long-held record. To throw a spanner into the works, the Johannesburg-based Lions sit on 68 tries this season and will be looking to break the barrier first when they face the Jaguares in Buenos Aires this weekend.

While the Crusaders and Lions have racked up large numbers of tries in certain games, the consistent try scoring of the Chiefs has been most impressive. On 11 occasions this season, the Chiefs have past four tries in a game. In the previous 20 years, no other team had achieved this in more than nine games.

For the Chiefs, Damian McKenzie and Seta Tamanivalu lead the try scoring chart with nine tries each.

Here's a taste of @ChiefsRugby season highlights so far as they look to regain top spot of the NZ conference.https://t.co/9TQvrvVnHz— Super Rugby (@SuperRugbyNZ) June 27, 2016 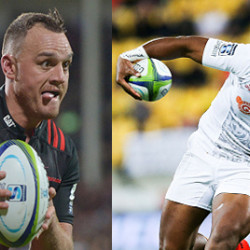