Another TMO controversy loomed for the Chiefs when a try to wing Etene Nanai-Seturo was over-ruled on Friday in Hamilton, but the Chiefs held on with an outstanding defensive effort to beat the Reds 19-13, who had their own TMO concerns.

Early in the first half it was ruled Nanai-Seturo had knocked the ball on although referee Angus Gardner had made an onfield decision for the try.

Chiefs coach Colin Cooper said he didn't see any separation of hand from the ball in the touchdown and captain and flanker Sam Cane said his immediate thought was it was a try and he and the rest of the team jogged back to halfway.

In the end it didn't matter as a fine defensive effort, especially in the dying moments of the game, saw the Chiefs get the win.

Cooper acknowledged it was a hard call.

"My feeling is we won, we earnt it with our defence," he said.

More important was winning at home in their last game there and giving themselves a boost ahead of their visit to Fiji next week to play the Crusaders.

Reds coach Brad Thorn, who saw his side's season hopes end, was more positive hailing the team's gutsy effort and looking to a bright future with such a young side.

"It was gutsy. It went down to the wire at the end there and [it was] disappointing not to get that result.

"For the first half I felt we were mainly hurting ourselves – putting kicks out on the full or guys executing little things – but it was a slugfest in the end and we didn't quite get across the line," he said.

Reds captain and lock Izack Rodda said: "The second half was a cracker from both sides and in the last five minutes we were on their line just going and going and going. But credit to the Chiefs for holding us out, that was an amazing effort."

The Reds were twice denied tries by the TMO. Both instances, by Angus Scott-Young and Alex Mafi, were called for the players promoting the ball.

"That's always frustrating. But I just told the guys to keep at it, keep doing our game plan and it would work," Rodda said.

Thorn was less concerned with the TMO rulings.

"We had two disallowed in the first half, one where Sam [Cane] basically dragged our guy over the tryline. But I'm happy, those guys do a tough job every week. I think they're doing a good job there.

"It's a tough old gig, the crowd doesn't usually cheer for the referees," he said. 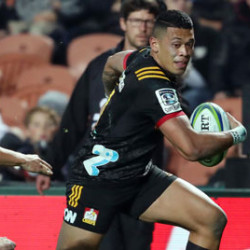