Crusaders new boy Mitchell Hunt can do no wrong and his 71st minute try completed yet another fightback from 5-24 deficit to beat the Blues 33-24 in Investec Super Rugby in Christchurch on Friday.

Scoring three tries by unleashing their forward power, through a masterly display from lock and leader Sam Whitelock in the second half the Crusaders achieved their fourth consecutive win and continued the Blues' woes where they haven't won in Christchurch since 2004.

While it was another loss for the Blues, they at least showed some of their true ability in taking the game to the Crusaders in a much more convincing fashion and the final margin did not reflect how much the Blues contributed to the game.

Finding some of the urgency that had been lacking a week earlier, the Blues set their store by camping in the Crusaders half for the first quarter and while there was still the odd unnecessary pass which turned ball over, there was little gain for the home team.

Instead it was the willingness of the Blues backs to move the ball, especially from the rear where fullback Michael Collins and wing Matt Duffie proved adept in making good ground when bringing the ball back.

Duffie found room in mid-field, passed to lock Gerard Cowley-Tuioti before halfback Augustine Pulu linked with Duffie on the blindside and there was time for him to find second five-eighths George Moala lurking in support on the goal-line to cross after 10 minutes.

It was 18 minutes before the Crusaders were able to set an attacking opportunity on the Blues 22m line and they built pressure through their lineout maul and second five-eighths Ryan Crotty was pushed out in the corner after receiving a fine long flat pass from prop Owen Franks.

Then from another chance close to the line lock Scott Barrett, prop Joe Moody and halfback Bryn Hall all went close before Hunt played halfback and fired a long pass to wing Manasa Mataele on his opposite wing to dive through in the corner for a try on debut.

The Blues got back on attack and it was Pulu and the hard-driving lock Patrick Tuipulotu who took an unexpected reverse pass to break and then link back with Pulu who stepped his way to the line, wasn't held in a tackle, and got over to extend the lead in the 30th minute.

Duffie again found more space from a poor Crusaders clearance and found left wing Melani Nanai before the ruck was created. The ball was cleared and Moala found himself easily able to penetrate the line populated by Crusaders tight forwards for his second try.

The Crusaders had a hot chance to close the margin just before half-time but in a key move from a five-metre lineout the ball was knocked out in the transfer from the lineout.

Francis landed a 47th minute penalty goal to extend the lead, but the Crusaders made use of defensive penalties to get up to the line to utilise their lineout maul and in the 50th minute it was replacement flanker Pete Samu who scored on the peel, although there was some suggestion in the television replay that he had lost the ball. No TV evidence was sought.

They had lost their momentum and the Crusaders took advantage to get back into Blues territory and use their lineout drives and in the 56th minute replacement hooker Ben Funnell was on the receiving end to score.

Once Hunt relieved the scoreboard pressure, the Blues were pinned back on their line and a dropped ball in-goal by Francis spelled the end of any recovery hopes as the Crusaders worked the ball from a penalty scrum five metres out from the line and in broken play it was halfback Mitchell Drummond who scored just on fulltime. 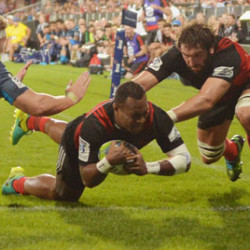