Crusaders drum out warning ahead of final Shutting the Sharks down and inducing a night of skills paralysis and tactical imperfection, the Crusaders ran in five unanswered tries to claim a 38-6 win and an Investec Super Rugby final berth next week.

Based on the evidence of their display, the Crusaders could not be discounted from taking yet another championship whoever they meet in the final.

Their support was consistently superior to the Sharks and while there was defensive intensity from the visitors who landed some big hits, they were unable to knock the Crusaders off their game and had no answer to the unrelenting continuity from the home side.

While the Sharks demonstrated running intent early in the game with a breakout from their own quarter sparked by fullback SP Marais, it was a rare moment of clarity in an otherwise fractious Sharks start. Kicks were inaccurate, going out on the full, or not committing the Crusaders' defence.

By comparison, the Crusaders made the most of the inaccuracies and countered through fullback Israel Dagg's precision touches. They proved more assured when they received their first chance and struck hard in the 16th minute.

Continuity between the experienced home loose trio punished the Sharks for a poor clearing kick by centre Paul Jordaan. Wing Nemani Nadolo charged onto the ball to set up a ruck.

As the ball moved to the left, flanker Matt Todd found Richie McCaw who flicked the ball quickly to No.8 Kieran Read. He stepped into a gap, accelerated and cut past a cover defender to score the try beneath the posts for the opening try of the game in the 16th minute.

Statistics (thanks to OPTA)
Team Stats - Lineups -
Another inaccurate kick allowed Nadolo to follow-up an Israel Dagg kick and tackle Jordaan with the home team's support play securing the ball, catching the desperate Sharks playing the ball off-side. That allowed Carter to land his third penalty goal by the 30th minute to take the Crusaders to a 16-3 lead.

In spite of the obvious deficiencies in their approach, there was little improvement from the Sharks who conceded their first lineout of the second half and failed to find their touches from penalty chances.

If hooker Corey Flynn wanted to ensure his Crusaders legacy he couldn't have done any more with some powerful runs and a superb turnover at the breakdown which resulted in Naholo's 48th minute try, courtesy of more good link work between Carter and Colin Slade.

Even in the timing of their substitutions the Crusaders management showed an edge with replacement halfback Willi Heinz stealing an uncontrolled heel from a Sharks' scrum to grab the ball and race 10m to score 16 minutes from the end.

The coup de grace game in the 68th minute in a move which started with the Sharks playing a tap penalty 10m from the Crusaders line. The ball was lost and cleared downfield.

The return kick from replacement Tonderai Chavhanga was taken by Slade and he set in train the movement which resulted in a try on the right wing for replacement Johnny McNicholl to score.

Given the Sharks' set-piece quality was expected to be a factor in the outcome, it was the final irony when in the 77th minute the Crusaders kicked for a lineout drive and secured the mauling try for Todd.
Anyone who doubted the Crusaders right to be regarded as the best franchise in the competition's history could not argue with the display under finals pressure on the night. 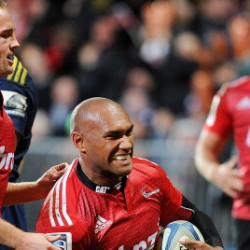