Facing the opportunity of achieving their second Investec Super Rugby championship hat-trick, the only team to have done it, the Crusaders management were already well into their preparation to meet the Jaguares.

Next week's final at Orangetheory Stadium in Christchurch was set up after a thrilling no holds barred semifinal 30-26 win over the Hurricanes.

QUICK TAP: TOUGH HURRICANES PUSHED CRUSADERS HARD
Coach Scott Robertson rated the game as deserving of a final and it had been played with Test match intensity.

"You've got to give it to the Hurricanes, it could have gone either way," he said.

Once the Hurricanes scored either side of halftime the game had developed into a blow-by-blow contest.

But the Crusaders, under fire, had stayed calm and he said first five-eighths Richie Mo'unga's goal-kicking had kept them in front.

"They [the Hurricanes] were always chasing and the defence in the end was remarkable," he said.

Robertson said the resilience on defence during the second half assault by the Hurricanes was the key element to the win from his view.

The players had come off the field and said it felt like they had played a Test match.

The game took its toll however. Prop Joe Moody took a blow to the shoulder and left the field just after halftime. Robertson said he probably could have carried on but he had been performing well, so they 'retired' him.

...And that is why the Crusaders are off to their third #SuperRugby final in a row!


Lock Scott Barrett and second five-eighths Ryan Crotty were to have x-rays on their hands while Mo'unga was also having his shoulder assessed.

The Crusaders' preparation would start all over again for the last time, and while it was the chance for a perfect finale for No.8 Kieran Read and tighthead prop Owen Franks, the side would be preparing with huge respect for the Jaguares, for the way they won their semifinal and for the way they had played all season, Robertson said.

They had already been assessing the Jaguares and were a couple of days ahead of where they might have been.

They played with passion and emotion and they were a tough and brutal side.

"When they toured we got a good feel of how they can be, their physicality at the breakdown. They've got enough Test players in their team to play at the highest level in pressure moments so it is going to be another hell of a match for us," he said.

The Crusaders training would be measured and would be geared towards being in the best physical, but more importantly, the best mental condition for Saturday, Robertson said. 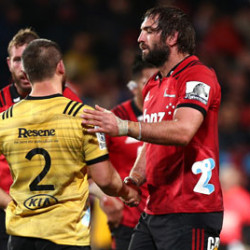