Unleashing a powerful third quarter, the Crusaders pummelled the Rebels en route to a record-breaking 55-10 win on Australian soil, in Melbourne, on Friday.

It was also a record loss at home for the Rebels.

Building on a fine forward effort where lock Scott Barrett, flanker Matt Todd and No.8 Jordan Taufua were in outstanding form and the rest not far behind, the Crusaders showed their championship form to outscore the home side 42-0 in the second half.

Ahead by only 13-10 at the break, the Crusaders upped the ante from the outset of the second half and had their reward, courtesy of a crosskick by second five-eighths Ryan Crotty to wing Seta Tamanivalu. The big wing took the ball and then fed it to hooker Andrew Makalio who was supporting inside him for his second try of the night.

Then, seven minutes later, in the 51st minute, from a strong build-up the ball was slipped across the face of several players to centre Jack Goodhue, running a perfect angle to take the ball, and the gap to score the try.

Replacement first five-eighths Mitchell Hunt penalised a Rebels downfield kick by running the ball back, drawing in three defenders before giving Tamanivalu the ball 50m out.

Bumping off would-be tacklers like a latter-day Jonah Lomu, Tamanivalu flicked the ball inside for flanker Pete Samu to score, and from the restart lock Sam Whitelock blew the defence apart, set off downfield with flanker Matt Todd in place to take a pass. He handled for only enough time to give the ball to replacement halfback Bryn Hall who had too much pass and he scored.

Traffic to the sin-bin had dominated the half with the Rebels with centre Reece Hodge the first offender for a deliberate knock down in the 14th moment, an infringement repeated by Todd in the 22nd minute, and fullback David Havili in the 33rd minute.

Some outstanding Crusaders defence, especially on their own goalline, denied the Rebels' attempts to use their lineout maul with some effective countering which stopped the home attacks dead.

There was also a fine piece of desperation by Goodhue to get back and deny flanker Angus Cottrell a try after a ball went to ground in midfield but a TMO decision showed Goodhue was a fraction of a second faster in getting his hand to the ball.

Crusaders halfback Mitchell Drummond failed to grasp the ball in some helter-skelter basketball-type play in the 32nd minute and it was Hodge who toed the ball ahead, got the bounce and the subsequent try to level the scores.

Earlier, Tamanivalu produced the finish in the corner after sustained Crusaders pressure and a quick tap penalty by Drummond. It took a long pass flung by first five-eighths Richie Mo'unga to clear the defence and allow him over in the corner. Then in the 18th minute following good breaks by Goodhue and Ryan Crotty, with a contribution from flanker Pete Samu, gave hooker Andrew Makalio a chance to rumble over on the blindside.

Barrett was denied a try after Drummond picked up the ball which lay unattended at the base of a Rebels ruck. He made 50m before linking with Barrett, however, he was ruled to have knocked the ball on in attempting to ground the ball in Hodge's tackle – a hairline call from the TMO.

But the Crusaders were able to take a three-point lead to the break after Mo'unga goaled an injury time penalty goal attempt.

The Rebels were not helped when losing Test halfback Will Genia just before the break to a knee injury. 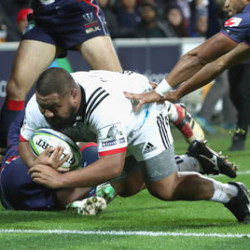