Demonstrating the sort of class that made them Investec Super Rugby champions last year, the Crusaders in their 45-22 win over the Highlanders showed the all-round skill and form that will make them formidable prospects again in 2018.

This wasn't only your usual New Zealand derby, it was a white-hot battle between two rivals who only need the sniff of a contest, whether in Super Rugby or the Mitre 10 Cup, to stir their competitive instincts.

QUICK TAP: CHIEFS NOT CONSUMED BY THE POCOCK EFFECTThe score was the same as in last week's loss to the Chiefs but this was a significantly different Highlanders side, who in the final count could probably feel that their concession of penalties allowed the Crusaders to dictate at key stages.

It wasn't only a celebration of prop Wyatt Crockett's 200th Super Rugby appearance but also All Blacks captain Kieran Read's first game at this level of the year.

Of them all it was probably the sight of Read making some strong runs in his 47 minutes of action that was most welcome although the form of first five-eighths Richie Mo'unga, with 25 points, was another reminder of the depth in his position in New Zealand while flanker Liam Squire highlighted why he has been such an important link in the All Blacks' selectors plans.

Wanting to avoid the lightning strike the Chiefs effected last week, the Highlanders were under pressure again from the start and after prop Joe Moody surged into space the chance was created for halfback Bryn Hall to fling a long ball to the blindside wing where George Bridge was waiting to open the scoring.

However, it came at a cost as Moody left the field with an injury which saw Crockett onto the field after only five minutes.

Scrum penalties then became a significant factor for both sides. Firstly for the Crusaders in the 13th minute when after being under intense pressure on their own line, the Crusaders got a penalty and cleared the ball down field. In the process they unleashed a lineout move with hooker Andrew Makalio sweeping across the lineout like a halfback to work a switch move with wing Seta Tamanivalu around the 15m line.


After second five-eighths Ryan Crotty went close to scoring, Hall fired a long pass to the outside where fullback David Havili took the ball and ambled over the line for a try.

But from their penalty awarded in the 17th minute, the Highlanders kicked to the corner and claimed the lineout. In the resulting play halfback Aaron Smith's passing had the defence on the run and when he flicked a short pass to No.8 Luke Whitelock who took the ball close to the line before prop Tyrell Lomax, in a low-slung position, took a perfect offload to go over beneath the posts.

The Crusaders looked to be gaining momentum, forcing penalties from the Highlanders but some superb defensive work by Squire created impetus for them to create their own mayhem. From a turnover he secured, the ball popped out of a ruck to Aaron Smith who backhanded the ball to wing Richard Buckman who was still getting up off the ground.

Sensing the moment he managed to get a good pass away which resulted in Ben Smith in-passing to first five-eighths Lima Sopoaga who was into a huge gap. He cleared out down field, drawing the defence and then finding Smith in support to break two tackles and pull the Highlanders to within a point.

But in typical Crusaders fashion they maximised their time in the first half by producing a halftime knocker when Mo'unga found another gap, slipped the ball to Crockett. Flanker Matt Todd was in support and when he ran out of room it was the ever-present Makalio who took the ball forward and then got the ball to lock Scott Barrett whose support was rewarded with the try.

The break offered no respite from scoring action as the Crusaders made good of a Hall run from the base of the scrum to run wide and pass to Crotty. He had Mo'unga, who had doubled around, outside him to take the ball, kick ahead and then out-run Ben Smith and Sopoaga to secure the bouncing ball and slide over for the try.

But if home fans thought that was the end of the Highlanders, wing Waisake Naholo had other ideas three minutes later when centre Rob Thompson gave him space allowing Naholo to let the afterburners take over to clear out for the try.

The game lost some shape as substitutes were introduced through the middle stages but when the break came it was inspired by a game-shattering burst of speed from Mo'unga and yet another long pass found Bridge in wide open space for his second try heading into the last 10 minutes.

FT | @crusadersrugby charge in the second half and pick up a 45 - 22 win over the Highlanders to extend their lead at the top of the #SuperRugby table. 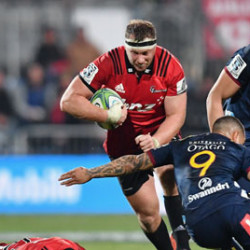