Crusaders coach Scott Robertson has laid down a challenge for the Rebels ahead of Friday's Investec Super Rugby game in Melbourne.

Robertson said the second half of the competition would be a test for all Australian sides because he felt their lack of depth would be exposed.

After a good start to the season where they headed the Australian Conference for several weeks the Rebels' progress has slumped and they go into Friday's game on the end of four losses.

"The depth of squad is always tests and that's the most critical thing in Super Rugby," he told Australian media on Wednesday.

"If you've got the ability to go three or four deep in a position and still find ways to win, you're a chance.

"The next two or three weeks, there's some games where we'll see if there's still a gulf or if it's been bridged by the Australians.

"I know they're hungry and we need Aussie rugby to be really strong," he said.

PIRI'S PICKS! It's set to be a blockbuster round of #SuperRugby with all five NZ teams in action! But who will win? Get the lowdown from @piriweepu as he casts his eye over the round! pic.twitter.com/hYThT5W7jg— Super Rugby (@SuperRugbyNZ) May 2, 2018


The Rebels had benefited from the reduction of teams in Australia from five to four and they had picked up several ex-Force players.

Robertson had seen the depth of his squad measured when having to replace injured first five-eighths Richie Mo'unga who suffered a broken jaw. Mitchell Hunt and Mike Delany had both started for the Crusaders as they maintained their winning form.

Mo'unga will return to the Chiefs for the Melbourne game in a selection which features six starting changes from the team that beat the Brumbies 21-8 last weekend.

During his recovery, Mo'unga had regained the five kgs he had lost and was ready to resume.

Mo'unga will have a chance to continue his bid for a place in the All Blacks squad to play France in June but for the moment his mind is set with preparing for the Rebels game.

"It's about playing some good footy and off the back hopefully some rewards come," Mo'unga said.

The Rebels have welcomed Test halfback Will Genia back into their side for Friday after he missed their South African tour due to injury.

Coach Dave Wessels said: "Will's just a competitor. He's a world-class player but he's also very competitive and he's a good organiser. Just having his voice back in training this week has been valuable.

"If anyone missed their detail or their role, he's right on to them which is really handy."

Wessels knows his side faces a challenge against the Crusaders and acknowledged the Rebels would have to play their best and secure some luck if they were to stop the champions.

REPORT + HIGHLIGHTS: A Manasa Mataele double and a superb defensive effort gets @crusadersrugby home in Canberra. 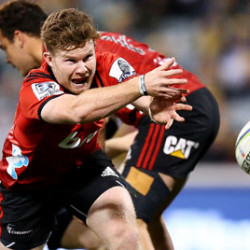