Mike Delany kicked 20 points and made a triumphant return to New Zealand rugby when the Highlanders beat the Blues 30-27 in an Investec Super Rugby cliff-hanger in Dunedin on Friday night.

They held out a desperate wave of last-minute Blues attacks to gain their sixth win in eight games and regain the Gordon Hunter Memorial Trophy for the first time since 2006 in an enthralling finish before an ecstatic crowd of 18,000.

Each side scored two tries and the game could have gone either way but Delany's kicking, seven from nine, gave the Highlanders the final say.

The Highlanders went into the game with five wins from seven and the Blues with just the one win from the same number of matches.

The Highlanders were coming off the bye and the Blues off a 23-29 loss to the Sharks at Eden Park.

That prompted wholesale changes to the Blues while there were two changes in the Highlanders, Mike Delany and Phil Burleigh replacing Chris Noakes and the injured Ben Smith in a reshuffled backline.

The Blues had won eight of the previous 10 games against the Highlanders, whose last victory had been in 2006.

The Blues made the best possible start, scoring after only three minutes when Shaun Treeby put down a pass from Aaron Smith. Ma'a Nonu scooped up the loose ball and broke a tackle and, from the ensuing ruck, fullback Hadleigh Parkes had the overlap and scored in the right corner.

The Highlanders struck back after 12 minutes, second five-eighth Shaun Treeby scoring in the right corner after a planned move from a scrum. Hosea Gear took an inside pass from Delany, broke clear, drew the defence and Treeby had a clear run to the line. Delany converted from the sideline and added a penalty from 25m and in front four minutes later to extend the lead to 10-5.

The Highlanders tendency to concede penalties within kicking distance was proving costly and Anscombe kicked his third after 33 minutes to give the Blues a 14-13 lead.

But the Highlanders regained the lead 16-14 just before halftime when Delany kicked his third penalty when Nonu was caught in possession under his own posts.

It had been an even half. The Highlanders had an edge in territory but kicked away too much ball and made too many mistakes to fully capitalise while the Blues had the edge at scrum time and looked dangerous in the backs.

The Blues regained the lead 17-13 three minutes into the second spell when Anscombe goaled after Nasi Manu was penalised 32m out and in front or his posts but Delany replied for the Highlanders two minutes later and it was 19-17.

Bryce Lawrence's whistle continued to dominate and the Blues went ahead 20-19 when Anscombe kicked his fifth penalty.

Delany kicked his fifth penalty after 11 minutes, this time from 36m, and the Highlanders went ahead 22-20.

Piri Weepu, the under-fire Blues halfback, replaced Alby Mathewson and it paid immediate dividends when, after a patient buildup, he fed Rene Ranger who charged over from close range. Anscombe converted and the Blues led 27-22.

Delany kicked his sixth penalty after a frantic Highlanders attack and the Blues led by two points going into the last quarter.

The Highlanders took the lead again, 30-27, 10 minutes from the end when Gear stabbed a kick ahead and replacement fullback Kurt Baker dived on the loose ball to score. 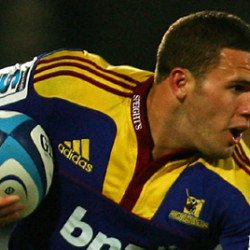