Stormers flanker Pieter-Steph du Toit is looking for a similar crowd reaction from the Newlands faithful for Sunday's (NZT) Investec Super Rugby game against the Highlanders to that achieved last week against the Crusaders.

The Stormers gained a controversial 19-19 draw after a Crusaders try was incorrectly disallowed but du Toit said the crowd played their part in the Stormers' recovery.

"It was like a Test match. To see all the supporters there was great and to end as a draw was a bit sad for both teams, but I think everyone got value for their money at the end of the day," he said.

The Stormers want a strong finish to the season to force their way into playoffs contention.

"We have had some injuries, but hopefully in the next few weeks we can see the full potential of this squad. We saw a bit of it against the Crusaders last week when we actually could have won the game.

De Toit will have extra incentive to achieve a win against the Highlanders as he will be playing his 50th game for the Stormers.

"I have had a good run so far, I am really enjoying my rugby here in Cape Town," he said.

The move had brought him closer to his family and that allowed him to enjoy life more off the field with a resulting effect on the quality of his rugby.

And while reaching 50 appearances for the Stormers was a point of pride, the quality of his performances was more important.

"It is about how many games you can perform in and actually play well rather than just about a number," he said.

What was also important was the connection he had with the experienced core of players in the side: Steve Kitshoff, Eben Etzebeth, Frans Malherbe, Siya Kolisi and Damian de Allende.

"These guys have played a lot of games together, so they know each other and there is a special bone," he said. It is nice for me to be able to be part of this set-up.

"All the experienced guys and a lot of talented players as well, so it just comes down to the fact that we need to perform on the day," he said. 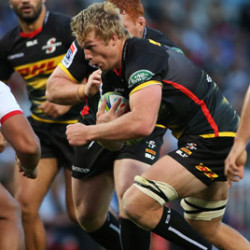