While we are sure to see new talent emerge on the Investec Super Rugby stage this year, there are also a number of returning stars who are set to have a big impact in 2019.

Quade Cooper (Rebels)
After being left out of the Reds squad last year, flamboyant playmaker Quade Cooper makes his return to Investec Super Rugby for the Melbourne Rebels. Cooper’s return to Super Rugby is made all the more exciting by the resumption of his partnership with halfback Will Genia. The dynamic duo led the Reds to a Super Rugby title in 2011 and have enjoyed plenty of success with the Wallabies on the international stage. Although unlucky to miss out on the playoffs in 2018, the Rebels will be hoping the injection of an in-form Cooper can help guide them to the top of the Australian conference.

QUICK TAP: LIONS TEAM PREVIEW 2019
Ma’a Nonu (Blues)
Is there another twist left in the stellar career of Ma’a Nonu? The double Rugby World Cup winner played for three Super Rugby teams from 2003-2015 but never managed to lift a Super Rugby title. Now, at the age of 36, Nonu has another shot at Super Rugby glory with the Blues. The powerful and skilled midfielder joins a star-studded backline and will play a big role in guiding the Blues young playmakers. If Nonu can show that he has lost none of his power, pace and slick distribution ability, don’t rule out a shock recall to the All Blacks either.
James Marshall (Hurricanes)
A key cog in the Hurricanes inaugural Super Rugby title win in 2016, skilled utility James Marshall is back after a stint with London Irish. Able to cover any position in the backline apart from halfback, Marshall will provide great balance, depth and experience for the Hurricanes in 2019. A slick attacking runner with a booming boot, Marshall sits on 44 caps for the Hurricanes and has scored 87 points.

Marty Banks (Highlanders)
A bona fide cult hero for the Highlanders, the return of Marty Banks will be welcomed with open arms by the Forsyth Barr faithful. With Lima Sopoaga now plying his trade in the UK, Banks will provide a wealth of experience alongside young play makers Bryn Gatland and Josh Ioane. A proven big-match player and expert tactician, Banks may have the inside running for the ten jersey over his younger counterparts. Off the field, Banks will play a crucial role in helping to develop and grow the younger members in the squad.

Are you ready to #raisethestakes?

Schalk Brits (Bulls)
Due to turn 38 during the 2019 Super Rugby season, former Springboks hooker Schalk Brits will be the elder statesman of Super Rugby this year. The seasoned hooker and set-piece perfectionist has been called back to South African rugby by Springboks coach Rassie Erasmus who is looking at Brits as a back-up option for Malcolm Marx at the show piece tournament in September. But before he gets that far, Brits will be hoping to have a big impact for the Bulls as they look to rebound from a disappointing 2018 campaign.
Also returning
With the lure of the Rugby World Cup approaching in September, more players have returned to Super Rugby to push for a place in the show piece tournament. Included among the returning players are former Springboks powerhouse Duane Vermeulen and 100-cap Wallaby outside back Adam Ashley Cooper. Vermeulen will add some genuine firepower to the Bulls pack while Adam Ashley Cooper will make the Waratahs attack even more dangerous alongside Israel Folau and Kurtley Beale.

?? Are you ready for an action-packed season of #SuperRugby? Take a look at our list of 19 things to look forward to in 2019 and let us know what's at the top of your list! 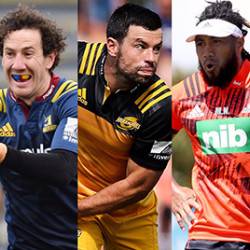