Outstanding Highlanders centre Malakai Fekitoa, rated by some pundits as the find of the season in the Investec Super Rugby New Zealand Conference, has caught the attention of the national selectors.

All Blacks coach Steve Hansen admitted to Newstalk ZB that the midfielder could be initially named in the first 35-man camp to prepare for the Steinlager Series against England.

Hansen, assistant coach Ian Foster and selector Grant Fox will reveal the maiden All Blacks selection for 2014 on 12 May.

That number will be trimmed to 31 players towards the end of Investec Super Rugby in May, ahead of three-Tests against 2015 Rugby World Cup hosts England.

The Series opens at Eden Park on Saturday 7 June in an international double-header with the Black Ferns playing a pre-World Cup match against Manusina Samoa as the curtain raiser.

England then heads to Dunedin for the second Test at Forsyth Barr Stadium on Saturday 14 June with Waikato Stadium hosting the third Test on Saturday 21 June.

Incumbency and form are likely to ensure that Conrad Smith and Ma’a Nonu are the first choice centres, but a desire to develop depth could see the 21-year-old feature during the international season.

“He's certainly worthy of coming to the camps and we name those 35 players on the 12th of May,” Hansen said this morning.

"We've got to name 31 for the June series, so how many midfielders we have will probably dictate whether we have him in the squad.” 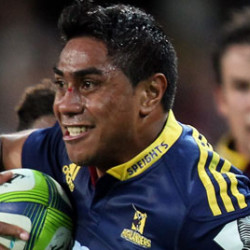