The Chiefs have once again shown that they can never be written off by holding on for a 19-13 win over the Reds despite having just 15 percent of possession in the second half.

Up 19-6 at halftime, it looked like the Chiefs may run away for a bonus point victory, but the Reds forced the home side into a battle of attrition in slippery conditions in Hamilton.

QUICK TAP: CRUSADERS KEEN TO RETURN FOCUS TO RUGBY
The Reds big pack seemed to spend the majority of the second half banging on the try line as the Chiefs racked up an incredible 242 tackles to the Reds 85 tackles.

Despite enjoying 85 percent of possession and a huge territorial advantage in the second half, the Reds could only come away with one try as the Chiefs epitomised their ‘Chiefs Mana’ catch try to hold Brad Thorn’s side out.

While the Reds can return to Australia with their heads held high, they may rue not chancing their arm out wide more often as the Chiefs pack refused to waver on defence.

Every member of the Chiefs pack deserves a pat on the back from coach Colin Cooper for their defensive effort, but special praise must go to Pita Sowakula (25 tackles), Lachlan Boshier (22 tackles), Jesse Parete (22 tackles) and Mitch Karpik (18 tackles).

They set the tone early when impressive rookie wing Etene Nanai-Seturo looked to have dotted down following a powerful bust from centre Alex Nankivell but the TMO ruled a dropped ball despite it looking like a try at normal speed.

It didn’t take long though before the Chiefs got on the board when No.8 Pita Gus-Sowakula beat three defenders on a rampaging run to the line to score his first try in Super Rugby.

In a try that would give an indication of what was coming up in the second half, the Chiefs pack wore the Reds down through 13 phases before prop Atu Moli barged over the line.

The Chiefs third and final try of the half came right on the hooter when a couple of long balls caught the Reds napping out wide and Nanai-Seturo finally had his try.

It was a well-deserved halftime lead for the Chiefs but this was a lead that was built on grit and determination.

They now move to 27 points on the competition ladder and jump over the Blues into fourth spot in the NZ Conference.

Realistically, they will still have to win their final two games to have any hope of making the playoffs, which makes next week’s game against the Crusaders in Suva an absolute blockbuster. 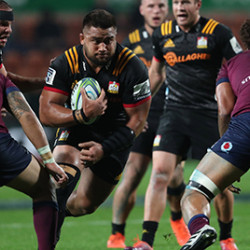