Poor defence and some ill-discipline let the Highlanders down in their 34-22 loss to the Stormers in Cape Town.
The loss means a number of things for the Highlanders. It means they didn’t pick up a win on their South African tour, they have slipped out of the top eight, and they are at risk of slipping even further down the ladder with their second bye next week.
For the second week in a row, the Highlanders had a late scratching, with Josh Ioane withdrawn. Forcing Marty Banks to start and Dan Hollinshead moved onto the bench. Banks had only arrived in South Africa earlier in the week after being called over as injury cover.
Waisake Naholo had a brilliant performance in his first game since Round six. He made seven tackles and made 111 metres, more than anyone else on the field. He got stuck in at the breakdown and bagged a try in the 66th minute.
It just wasn’t the Highlanders day, however. They missed 26 tackles to the Stormers 15, and they lost Matt Faddes to the bin for a dangerous tackle on second five-eighth Damian de Allende who landed on his neck.
The Highlanders opened the scoring through Marty Banks who slotted a penalty, but just two minutes later the Stormers were on the board thanks to Hershel Jantjies who just made it over the try line, despite desperate defence from Aaron Smith.
Stormers skipper Siya Kolisi was electric for his side, and his try was one for the highlights reel. He made a bust and did a full 360 degree turn as Highlanders defenders tried to bring him down. But he crossed the line and the Stormers went into the sheds at half time with a 17-3 lead.
In the 53rd minute Sio Tomkinson took a bullet pass from Smith to crash over the white chalk and get the Highlanders to within seven. But in quick succession, the Stormers struck back, this time through Cobus Wiese. The Highlanders found themselves playing catch up for the remainder of the match. Every time the visitors would score, the home side would reciprocate. In the end, it was the Stormers who made the most of their opportunities, claiming the bonus-point win.
Whilst disappointed with the result, the Highlanders will be pleased with Naholo’s contributions, but they’ll be equally desperate to bounce back strong after next week’s bye if they want to be playing finals rugby. Their time is running out.
Scorers: Stormers 34 (Herschel Jantjies, Siya Kolisi, Cobus Wiese, Jean-Luc du Plessis tries; Joshua Stander 3 cons, pen; du Plessis con, pen) Highlanders 22 (Sio Tomkinson, Waisake Naholo, Siate Tokolahi tries; Marty Banks pen, con; Dan Hollinshead con). HT: 17-3 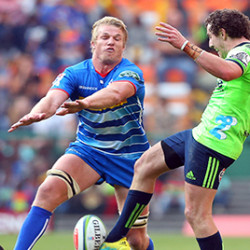