The Blues travelled south with high hopes of ending a five-year losing streak against the Hurricanes but instead imploded in the second half to lose 29-24 after leading 5-24 at halftime.

It was a horror way to end what has been another underwhelming season for the Blues which sees them take the wooden spoon in the New Zealand conference and sit only above the Sunwolves and Reds (with a game in hand) on the overall ladder.

QUICK TAP: RAMPANT CHIEFS STORM INTO QUARTERFINALS
With a home quarterfinal wrapped up, the Hurricanes trotted out a virtual development team against a near full-strength Blues outfit. On paper, the Leon MacDonald-coached side should have coasted to a comfortable victory and it looked like they were well on their way at halftime.

Well-constructed tries to Tanielu Tele’a, Caleb Clark and Melani Nanai helped the Blues to the handy 5-24 lead and all signs pointed to a big win for the Blues.

Things quickly went off script for the Blues as the Hurricanes brought All Blacks trio Ardie Savea, TJ Perenara and Asafo Aumua on from the bench.

As the Hurricanes intensity lifted, the Blues defence began to wilt and simple errors crept in.

Jackson Garden-Bachop relished a rare start in the ten jersey by orchestrating two tries early in the second half. The first was a chip through the line into arms of replacement fullback Fletcher Smith.

It was a carbon repeat moments later when Garden-Bachop chipped the ball over the Blues defence into the arms of Smith once again. Smith then found lock Isaia Walker-Leaware on his inside who laid on a brilliant step to score.

The Hurricanes grabbed the lead in the game for the first time in the 64th minute when replacement prop Alex Fidow made a powerful bust and fed to Peter Umaga-Jensen to score his second.
There was plenty of time for the Blues to get back into the contest but they never looked like it as basic ball handling skills and decision making let them down.

The final scoring act of the game was a Garden-Bachop penalty in the 75th minute to stretch the lead to 29-24.

The win was the Hurricanes twelfth win of the season and takes them above the Crusaders 11 victories although they remain second on the NZ conference ladder.

The Blues have plenty to think about in their off-season while the Hurricanes turn their focus to a quarterfinal at Westpac Stadium next weekend against a yet to be decided opponent.

FT | What a comeback from @Hurricanesrugby! Next week they will be back at @WestpacStadium for a quarterfinal.#HURvBLU pic.twitter.com/Kb4QYQ6hgb— Super Rugby (@SuperRugbyNZ) June 15, 2019 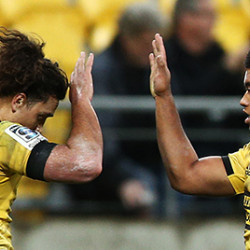