Hurricanes flanker Ardie Savea pulled off another of his specialist turnovers at the death to allow his side to advance to the Investec Super Rugby semifinals after beating the Bulls 35–28 in a thriller at Westpac Stadium.

But typical of the contest the Bulls refused to give in and it was only when star wing Cornal Hendricks was unable to hang onto a pass that the game ended. In its own way that represented the one fault the Bulls suffered, some poor handling at key moments.

QUICK TAP: MO'UNGA MASTERCLASS LEADS CRUSADERS INTO SEMIFINALS
It proved a pulsating contest which ebbed and flowed and that was down to the absolute refusal of the Bulls to yield to the demands of their recent travel schedule and the way the Hurricanes kept edging them out.

Both sides had desperate late breakouts, the Bulls first with wing Rosko Specman being bundled out in the corner while from the resulting lineout Hurricanes halfback TJ Perenara broke to halfway and the ball was carried deep into the Bulls 22m area but replacement back Fletcher Smith was unable to pull in the pass with the line open.

However, the Hurricanes' Achilles heel, the concession of penalties at crucial times, allowed the Bulls to get back downfield to put on pressure to secure their third draw on New Zealand soil this season.

It was the Bulls who lodged the first try in the eight-try contest.

Responding to a 10th minute goal to Beauden Barrett, the Bulls used a lineout to advantage with first five-eighths Handre Pollard slipping a weighted pass to centre Jesse Kriel. He took a gap and then fed fullback Warrick Gelant into space where he headed Beauden Barrett's corner-flagging tackle to score.

With 16 minutes gone, the Hurricanes ran the ball for centre Peter Umaga-Jensen to steal a gap break back from Kriel to give wing Wes Goosen space on the right. He ran ahead and in the tackle he slipped the ball to Perenara who, in spite of two goes to secure it, claimed the ball to score in his record-equalling 126th appearance for the side.

Goosen left the field in the wake of the try with a hamstring injury and was replaced by Salesi Rayasi.

Back on attack in the 22nd minute, the Hurricanes, clearly looking to play at a strength-sapping tempo given the recent air miles flown by the Bulls, ran the ball from a ruck and having shifted to the right wing Ben Lam was fed into space and put his speed to use to score.

Then, four minutes later, Beauden Barrett fielded a Bulls clearance to touch and worked a quick lineout with Perenara who ran down the five-metre line to set up a ruck. Rayasi moved in to cover halfback, saw a gap and set sail for the goalline to score with an impressive show of speed.

But if the Hurricanes thought they had control, Hendricks demonstrated why he couldn't be left with room to move when finishing off a Bulls decision to kick a penalty towards the corner, win the lineout and while the result Pollard threw a poor pass Hendricks secured it and pulled the halftime margin back to 24-14.

Into the second half and more exchanges of downfield kicking saw Beauden Barrett lob a high kick into space where Pollard was unable to cover the bounce or regain the ball. Barrett flicked it to prop Jeff To'omaga-Allen. Flanker Reed Prinsep took it forward before second five-eighths Ngani Laumape moved the ball to Rayasi on the left.

He slipped an impressive backhand offload to No.8 Gareth Evans. He powered on toward the goalline and then from the resulting ruck, Perenara slipped the blindside ball to Rayasi to score his second with ease.

However, he blotted his copybook in the 51st minute when the Bulls worked the blind in the Hurricanes' 22m area. Pollard threw a long pass to Hendricks but Rayasi, the last defender, deflected the ball conceding a penalty try and earning 10 minutes in the sin-bin.

While the Hurricanes landed a penalty goal to Jordie Barrett, the fullback was unable to deny Hendricks a second try when he latched onto a Pollard cross-kick to pull the Bulls within four points at 28-32.

FT | What a game! @Hurricanesrugby are heading to the semifinals!#HURvBUL pic.twitter.com/izQYlbQqiz— Super Rugby (@SuperRugbyNZ) June 22, 2019 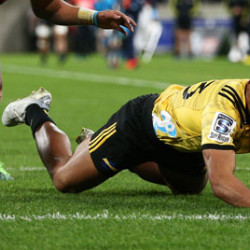