Hurricanes loose forward Vaea Fifita's three-week suspension has compounded the injury situation the side has suffered ahead of their Investec Super Rugby game against the Lions in Johannesburg on Sunday (NZT).

Assistant coach Carlos Spencer, who was speaking before the outcome of Fifita's hearing was known, said the Hurricanes had been preparing for the worst in regard to Fifita's hearing and there had been discussion on how they would get around his absence in their goal to claim a win that would secure a home playoffs place.

QUICK TAP: MORE INJURY WOES FOR DESPERATE BULLS IN DUNEDINBut they will have to achieve that, not only without Fifita but also centre Matt Proctor, wing Wes Goosen and lock Kane Le'aupepe.

Proctor had a pectoral injury which could be serious depending on whether it was torn. Goosen had a hamstring injury which was hopefully only a strain, Spencer said, while Le'aupepe had suffered a concussion and they have all returned to New Zealand.

Joining the side as replacements are wing Salesi Rayasi, midfield back Danny Toala and lock Liam Mitchell.

Spencer said the loss of Proctor would possibly give Peter Umaga-Jensen an opportunity, whether starting or off the bench, and he would be keen to take it. He had worked hard with the side all season.

"If he gets that opportunity he'll be ready to go, he's obviously very excited. He's a young exciting player and I'm sure he's looking forward to getting his opportunities if it comes," he said.

?? @SIX60's very own @matiuwalters has selected his form XV based on all the action from last week's round of #SuperRugby. Not suprised that @ChiefsRugby are represented well.

The side, in spite of the loss of key personnel would be looking to build on their win over the Sharks.

"Coming to an important part of the season it was a big game for us and we knew it was going to be physically a tough battle and I think the pleasing thing for us was, especially up front, the forwards did a massive job," Spencer said.

"A big part of our emphasis during the week was their physicality, especially around some of our defence and our individual contact, our one-on-ones, was very pleasing.

"A lot of our set-piece stuff, our lineout, our scrum more so, is something we need to take into this week against a Lions pack that are very formidable, especially around set-piece," he said.

With two games to go in the regular season Spencer said it was vital the side produced 80-minute performances in those games.

"A win for us is crucial this week so that's the main focus, a win would almost guarantee us a home quarterfinal. We understand it is a massive game for us this week so first and foremost a win is crucial but hopefully putting in an 80-minute performance going into the quarters and hopefully semis," he said.

Hooker Dane Coles got some good game time on Saturday. He was looking very sharp, Spencer said, and was excited to be playing.

"He's come through, he's had no niggles at the weekend so everything seems very good for him at the moment."

?? PLAYER CATCH UP | @BluesRugbyTeam midfielder Ma'a Nonu sits down with his old mate Mils Muliaina to chat about his career with @Hurricanesrugby, and his move to the Blues. 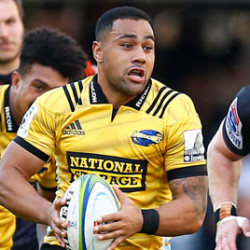