Valuable game time for key members of the Hurricanes squad ahead of next week's Investec Super Rugby playoffs have resulted in nine changes to the side for Saturday's game with the Blues at Westpac Stadium.

Missing from the side for the game are the Barrett brothers, first five-eighths Beauden and utility back Jordie, and second five-eighths Ngani Laumape. On the bench are flanker Ardie Savea and halfback TJ Perenara.

QUICK TAP: BLUES AIMING TO FINISH ON A HIGHHooker Dane Coles will captain the side while Richard Judd will be at halfback with Jackson Garden-Bachop at first five-eighths. Danny Toala and Peter Umaga-Jensen will be in the midfield while Salesi Rayasi will play on the right wing.

"It's a good opportunity for us to have a look at a couple of other players who haven't had a lot of time," Plumtree said.

It was also a good time to rest those who had carried much of the load. Injuries were also a factor. Chase Tiatia injured a calf muscle against the Lions and is in doubt for next week. Wes Goosen's hamstring suffered against the Sharks should see him back for the quarterfinal. However, centre Matt Proctor's pectoral injury is a continuing concern.

"There's obviously some injuries as well that have forced us to change. It wasn't easy trying to organise this team coming back from Africa and sorting the group out. We're there, and we've got a good competitive side and we're expecting a good performance," he said.

It's been a busy few weeks for Toala and Rayasi, who flew to Johannesburg for the Lions game, both making appearances, before turning around and flying home. Rayasi got threequarters of a game as the result of Tiatia's injury while Toala made his debut later in the game.

?? FLASHBACK! We take you back to 2014 for @BluesRugbyTeam's last victory over the Hurricanes. Can Ma'a Nonu inspire the Blues onto victory again five years later?

Plumtree said it had been a baptism of fire for the pair.

"Danny didn't get a lot of time, but he came on and did a couple of nice things. I thought Salesi played really well as well. We are looking at the future of this club in those boys and both of them will get to mark a couple of seasoned campaigners.

"It's a great opportunity for them, there is no pressure on them, they can go out and do their thing," he said.

Hovering over the side is the talk of Beauden Barrett's future plans with talk of transfer to other franchises being made. But Plumtree was keen for him to retain his contract with the Hurricanes.

"Beaudy knows just how much we love him here. He's a Hurricane, he's been a Hurricane for a long time. He's still got lots of rugby left in him. We want him to carry on in our jersey so we'll just go through that process," he said.

There were a lot of decisions players had to make in relation to whether they wanted to play in another World Cup, make money, experience life overseas.

"They've got all those decisions to weigh up and those are all personal decisions. We assist with that wherever we can. I have conversations with the boys that are out of contract and try to get to know what they want to do and go from there," he said. 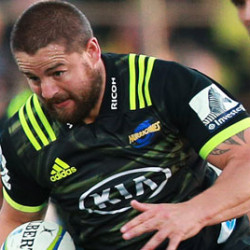