All Blacks first five-eighths Beauden Barrett suffered an illness that forced him out of the Hurricanes' 37-17 win over the Lions in Johannesburg on Sunday (NZT).

Coach John Plumtree said Barrett was ill on Friday evening and had woken still unwell on Saturday morning so missed the game.

QUICK TAP: SUPER RUGBY REVIEW: ROUND 17Plumtree said the Hurricanes benefitted from a plan to ensure they performed better in the second half. He explained that in their last two visits to Ellis Park they has suffered in the second half and a lot of work during the season had gone into the side's fitness and that was demonstrated in the win.

"I was really happy that we were in the game at halftime and putting on a couple of experienced players [Dane Coles and Ardie Savea] to boost the rest and using our bench in the last 10 minutes again to finish the game off," he said.

They felt if they could get past five or six phases with the ball they could either win a penalty or score a try.

"We had a lucky bounce straight away after halftime [when Ben Lam took the kick-off] and then scored again before the Lions fought back.

"They're a brave side, they never go away. They always come back at you and it was really important that we kept the scoreboard ticking over otherwise…the better they play the more confident they get so we just had to make sure their confidence levels didn't go through the roof," he said.

Having secured a home playoff game, Plumtree said he would be looking to give some tired bodies a break in Saturday's game against the Blues in Wellington.

Plumtree said during the tour he had been impressed with the development of players, especially in the backs, and he said with back players getting better and better the longer-term future looked scary for opposing sides.

He was delighted with the way the side performed in Africa and said the team were good both on and off the field and had enjoyed the experience.

Ngani Laumape doing what he does best! 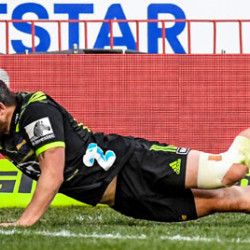