Knowing their Investec Super Rugby semifinal against the Brumbies is likely to be a tough battle up front, the Jaguares are sweating on whether big lock Guido Petti will be fit to play.

The 24-year-old suffered a sprained ankle in the 21-16 win over the Chiefs in the quarterfinal last weekend.

Petti struggled through the early part of this week and is being given until Thursday (Argentina time) to recover.

Marcos Kremer and Enrique Pieretto, who were also injured at the weekend, have been passed fit to play.

Also back in the availability frame is outstanding wing Ramiro Moyano. He last played for the Jaguares during their tour of Australasia six weeks ago.

The two sides met in Buenos Aires in regular season play with the Jaguares winning a tough, niggly game 20-15.

Tighthead prop Santiago Medrano said: "It's going to be spicy like any semifinal, we are going to have to maintain our concentration and our focus. They are very strong in the scrum and the maul. This is the most important game of my career with the Jaguares.

"I've got a lot of emotions mixed together because the work we've put in the whole year has borne fruit and we are closing in on our objective," he said.

The Jaguares were expecting a tough battle, especially from the Brumbies' ability at the driving maul, a vehicle that has provided 11 tries for hooker Folau Fainga'a.

"They have a great pack, one that is very experienced. The pack, the scrum and the maul, that is going to be the key.

"We have been playing very well in the scrum and the defensive maul but we were a bit lax against the Chiefs, although nothing that we can't correct.

"We trust in our defence and in the team. If we defend well then they are going to get frustrated and if they can't get through they give up the ball and they'll get nervous," he said. 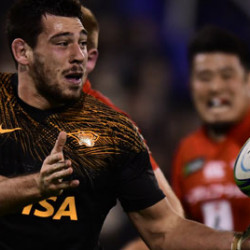