Finishing their home Investec Super Rugby campaign with a 39-16 win over the Reds at Eden Park had given the side a boost before two tough local derby games against the Hurricanes and Crusaders end their season.

Beleaguered coach Tana Umaga said the side's victory song would be sung for the first time this year at home but at the same time they were conscious of wanting to build on their success in the remaining games.

Umaga said all the attention paid to Jerome Kaino's last appearance on Eden Park had demonstrated his fortitude, especially when having the captaincy thrust on him and the way he played in the side's win.

It was another example of his ability in the art of stepping up on big occasions, he said.

But like fellow coach Brad Thorn of the Reds, Umaga was conscious of the effect of the refereeing decisions in the game. He said they would be seeking clarity on some of the rulings, especially in scrummaging where prop Alex Hodgman couldn't make much headway with referee Egon Seconds from South Africa.

And Hodgman was also looking for clarity in what was happening.

He was sure Thorn would also be asking questions because the key word was consistency and the coaches wanted to be giving certainty to their players so they were aware of where they needed to adapt.

It had been pleasing to see the side seize the moment in the middle of the first half when the Reds were reduced to 13 players on the field due to sin-binnings. The Blues had scored two tries which in the end marked the difference in the game. The Reds had only been able to score once when the Blues were similarly reduced to 13 in the second half.

Umaga said again that was a reference to how much the side wanted to win for Kaino.

The performance of the loose forwards, Kaino, No.8 Akira Ioane and flanker Blake Gibson, making his first appearance of the season, had been dynamic, especially when lined up against the experienced George Smith.

Gibson had brought guile and experience along with his usual tenacity and work rate, Umaga said and the trio had been immense.

"Akira has been training for a long time waiting for a game and he really put that out on the track today and obviously Jerome. It's been a long time coming and I thought they played well together," he said.

Rieko Ioane, playing at second five-eighths, had another powerful game and Umaga said he had been impressive in his approach not only on the field but off it at well.

"He looks fresh too, he doesn't look like he needs a rest," he said.

But having him in the midfield, where he was a good communicator, and paired with Michael Collins gave the backline vital leadership, especially with Collins able to keep a lid on the enthusiasm of halfback Sam Nock, first five-eighths Stephen Perofeta and Ioane. 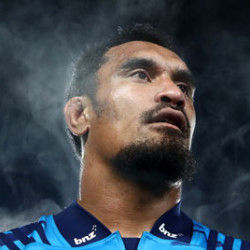