The Hurricanes have extended their winning streak to eight games and gained revenge for their semifinal loss to the Lions last year with a 28-19 victory over the Johannesburg-based side in Wellington.

It wasn’t a vintage display from either side as a procession of handling errors and sloppiness at set-piece time hindered what should have been a high-quality encounter between two of the best teams in the competition.

QUICK TAP: CRUSADERS BENEFIT FROM MELBOURNE STORM CONNECTION
The Hurricanes had the game sewn up at 28-7 up but will be disappointed to let in two tries in the final quarter as the Lions closed the final margin to just eight points.

The main talking point of the match was the excellent form of Hurricanes wing Ben Lam. In a night of limited opportunities, Lam grabbed an impressive hat-trick to take his season tally to 12 tries and enhance his claims for an All Blacks call-up.

His first try came in the seventh minute and was created from nothing. Retrieving a loose pass, Lam shrugged off two defenders from a standing start and ran 20 metres to score in the corner.

Lam’s second try underlined his world-class finishing ability. Despite being well-marked close to the line, Lam managed to evade two defenders to crash over.

The final try of the hat-trick came from a stunning Hurricanes build-up as Julian Savea and Beauden Barrett broke out from deep inside their own half. The sweeping movement ended when Lam showed great pace out wide to complete an impressive hat-trick.

Lam will now not only have his eye on an All Blacks jersey, but also the all-time single season Super Rugby try-scoring record which stands at 15 (held by Joe Roff, Rico Gear and Ngani Laumape).

The Hurricanes other try was created by Matt Proctor. The impressive midfielder celebrated his 50th Super Rugby cap by slicing the Lions defence open from a set-piece move and setting up Ardie Savea for a try on his return to the side from injury.

The Lions suffered a massive blow in the opening minutes when world-class hooker Malcolm Marx was injured out of the match. Despite the stop-start nature of the match, the Lions will be heartened to have added three tries to show they will be a threat in the playoffs.

Hurricanes captain Brad Shields said: “I’m really proud of how we played, we stuck to the game plan and came away with the win. We gave them a couple of easy tries so there are a few things for us to get right ahead of the Blues next week,” Shields said. 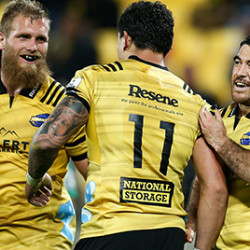