Liam Coltman recommits - to stay in the South through to 2022

Coltman has also recommitted to Otago for three years.

29-year-old Coltman has made 92 Highlanders appearances since his debut in 2013. He debuted for the All Blacks in 2016 and has played four Tests.

QUICK TAP: "IT'S OK TO ASK FOR HELP" - ISRAEL DAGG
Coltman said he was happy to have the opportunity to stay in Dunedin.

“It’s good to have the next few years sorted out. I have enjoyed my time in Dunedin and I love the lifestyle down here and the easy access to the outdoor pursuits I enjoy. My family and I are grateful to New Zealand Rugby and to the Highlanders for the opportunity to continue our commitment to Otago and the Highlanders.”

All Blacks Head Coach Steve Hansen added: “‘Colty’ is the ultimate team man. He’s been patient in our environment and made the most of his opportunities. He puts in a lot of hard work around the team and is always looking to improve as a footy player. We’re excited that he’s staying in New Zealand rugby.”

Highlander hard-man Liam Coltman has extended his contract out to 2022 with the Highlanders and @AllBlacks - come and see him in action this weekend when we take on the @BluesRugbyTeam - 7.35pm, Sat 20 April #HighlandersANDyou #NothingElseMatters pic.twitter.com/d2olaLVghp— Pulse Energy Highlanders (@Highlanders) April 15, 2019

“Liam is a humble and quietly-spoken person who has a fantastic work ethic and is a model professional,” added Highlanders Head Coach Aaron Mauger.

“He never gives less than his best and his consistency of performance is due in large part to his meticulous preparation and uncompromising approach. I am certainly glad for Liam and his family that his future for the next few years at least is with the Highlanders.”

Highlanders CEO Roger Clark said: “It’s fantastic to get another All Black to commit to the Highlanders over the next few years. We appreciate all players have choices these days and to have Liam choose the Highlanders is exciting.”

Otago Head Coach Ben Herring welcomed Coltman’s commitment for another three years as an important anchor for the provincial side.

“This is great news for us. Liam is a special player who cuts an exemplary figure in our team environment. He is a standout player and sets a really great example for excellence on and off the field, and we’re delighted he’s wanting to commit for three years,” Herring said.

Otago RFU General Manager Richard Kinley said: "It is fantastic for rugby that Liam is staying in New Zealand. Liam is a senior Otago player having played 67 games for Otago, leading by example both on and off the field. Everyone involved with rugby in Otago will be thrilled with this news."

???? @Adidas have helped us become more sustainable with our new training range, made with ocean plastic in association with @parleyforoceans. 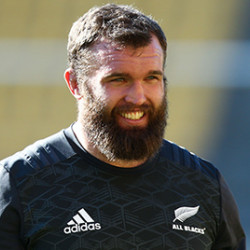