Crowd Goes Wild presenter and renowned rugby correspondent James McOnie studied the action in round 10 to select his New Zealand Form XV of the weekend.

A feature of McOnie’s side is the inclusion of five Highlanders in the forward pack. The Highlanders had the edge over the Hurricanes upfront in their 24-12 victory at Forsyth Barr Stadium and that has been recognised in McOnie’s selections. In the backline, Ma’a Nonu gets the nod to fill the 12 jersey after being selected in the same position by Piri Weepu last week. Josh Ioane, Matt Faddes and Ben Smith are selected in the backline to take the Highlanders representation up to eight players in this Form XV.

NOTE: The Crusaders were not considered for this Form XV due to having a bye in round ten.
Pick your Investec Super Rugby Form XV each week and go into the draw to win a Super Rugby Jersey! 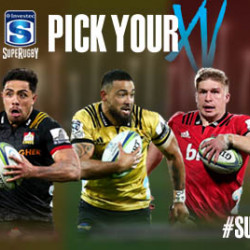