Plenty of challenges for Highlanders 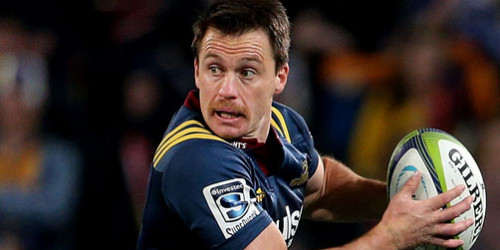 All the attention might be on whether the Crusaders can break their unbeaten streak on Saturday but for Highlanders captain Ben Smith his side are on their own unbeaten nine-game run and looking to see just where they are at with their game.

The Crusaders were playing good rugby which was reflected with them leading on the points table but Smith felt the Highlanders were progressing well and had been able to extract themselves from difficult situations over recent weeks.

QUICK TAP: APIA OFFERS A HINT OF THE BLUES FUTUREThe game, which they were excited about, would be a good measure of their progress, he said.

It would also be a game in which he became the most capped Highlander, supplanting Anton Oliver, something he never believed would have been possible when going along to games as a youngster to watch.

"The boys are pretty excited about it being a day game, that's something a bit different and the challenge for the boys is the Crusaders are probably playing the best footy in the competition and it's going to be an awesome challenge," he said.

Coach Tony Brown, who heads off to Japan on Sunday where he is assistant-coach of the Japan team, said the Crusaders were playing some outstanding rugby at the moment and the Highlanders would be looking to put pressure on them in everything they did, he said.

"It's going to be a massive challenge for us but one that we are quite excited about and one that if we get our game right and get our pressure right then we can be successful," he said.

Brown said the decision not to start first five-eighths Lima Sopoaga was down to him being not quite ready to start while also having had a slight calf strain. However, if he continued his progress he would be able to come off the bench at some stage.

His replacement over recent months Marty Banks had continued to get better and better and deserved the opportunity to start, Brown said.

Being able to call on nearly all members of the squad for consideration, only Liam Squire is still out, eased a lot of pressure on the team and the medical staff while also making selection meetings a little longer.

That also had benefits for the forthcoming game against the British & Irish Lions when the Highlanders wouldn't have access to their All Blacks and Maori All Blacks.

They had used 36 players in the last six weeks which would be helpful if they needed to call on the wider fringes of the squad.

"It is going to be easier for them to step up against a pretty good Lions team," Brown said.