This is the match of the round and a vital one for both sides, although they are both in good shape for the Rebel Sport Super 14 playoffs.
A loss for the Blues would put their place at the top of the table under serious threat and defeat for the Sharks puts them back on the bubble of the four.

FORM: The Blues keep winning and very few teams have looked likely to reverse that trend. Apart from a one-point loss to the Hurricanes the season has been one of uninterrupted success but it gets tough now as the playoffs loom; the Blues are all but assured of a place now. David Nucifora's men attack well enough to average three tries per match and defend so accurately that opponents only average one, but the Sharks are doing exactly the same and made a fine recovery from their mini-slump by battering the Reds at Brisbane last week. They are also well-placed to make the four but won't want to drop another game as any chance of a home semi will disappear in those circumstances.

WHO'S HOT: The Blues got good service from Ali Williams last week and the usual group of players who have been in top form all season carried it on against the Cheetahs; we're talking about Doug Howlett, Troy Flavell, Jerome Kaino and Isaia Toeava here. The Sharks laid the platform through their forwards and AJ Venter is in excellent form as he nears his 100th competition appearance. Although he has his critics John Smit is a fine player and the young centre pairing of Bradley Barritt and Waylon Murray have been among the Sharks' biggest successes this year. The Sharks have experience across the park and this often shows when the pressure goes on.

WE THINK: This will be a contest of almost test-match intensity and it should fill North Harbour Stadium. We don't anticipate a high score but think the Blues will win by a narrow margin; the Sharks will probably get a bonus point.

Sharks: Team to be announced 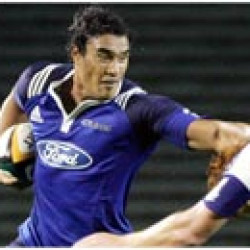