If, in January, anyone had to pick one of these teams to be near the top of the Rebel Sport Super 14 when this match was played most would have chosen the Waratahs.
However the Sydneysiders are awful this year and the Blues on fire, so don't expect the Waratahs to claim their first-ever win at Eden Park.

WALKING WOUNDED: The Waratahs lost a bunch of players in pre-season, particularly from the tight five, and have not recovered. They have not added anyone to the injury list recently but it remains a long one. The Blues are still without Anthony Tuitavake and Joe Rokocoko, who was injured in a warm-up after returning from All Black camp; Saimone Taumoepeau was injured in the Lions game but a chap named Tony Woodcock could have slotted in at loosehead if needed.

FORM: The Blues are in top form and have five wins and a single one-point loss to the Hurricanes. While some are commenting on the calibre of opposing teams the Blues have faced so far, they can only play what's in front of them and have taken maximum points from their last three matches, winning each with plenty in hand. The Waratahs, on the other hand, have lurched from bad to awful to worse. After winning at Johannesburg they have suffered some embarrassing moments and have only collected a draw against the Force. Even that was hardly memorable for the right reasons and most will recall only Sam Norton-Knight's brain explosion and Lote Tuqiri's over-the-top response. Their last two efforts, against the Bulls and Stormers in Sydney, were dreadful.

WHO'S HOT: The Blues have no shortage of players on song but at the top of the list, once again, are Troy Flavell and Doug Howlett. Howlett needs one try to set a new Super rugby scoring record and his defensive work this season has also been first class. Keven Mealamu's return will be keenly anticipated but Woodcock and Ali Williams couldn't even make the match 22. The Waratahs have little to be happy about. Lote Tuqiri is getting through plenty of work although rewards are slim and Peter Hewat has scored 65 of the team's 105 points this season without doing anything special. The forwards are average and the backs are dropping far too much ball. Ewen McKenzie has named an unchanged starting XV because these are the best players he has and there isn't the depth within his squad to make too many changes.

WE THINK: This one is a no-brainer. With the Blues being as hot and the Waratahs as bad as they are in 2007, the Blues will win this by plenty. We'd be surprised if the visitors can keep the margin below 20 points. 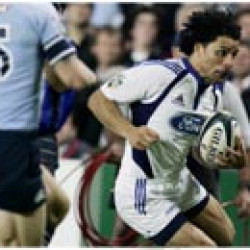