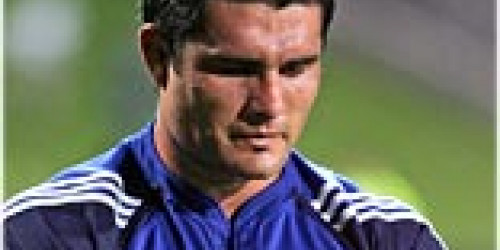 This clash of two first-round winners should be the highlight of week two in the Rebel Sport Super 14 and the victor will have set its season up in good style as a result.

WALKING WOUNDED: Neither Sam Tuitupou (shoulder) nor Isaia Toeava (knee) passed fitness tests after last week�s tough encounter and both remain in Auckland this weekend. Luke McAlister takes over at second five-eighths in what should be the most-watched effort of the night and Anthony Tuitavake shifts in to centre. Mark Gerrard got a 'good news, bad news' report on his knee injury � it will keep him out of this match but does not look likely to require surgery. Stirling Mortlock has recovered from a head knock and takes his place in the starting team while Stephen Larkham returns from paternal leave and there is a backline reshuffle.

FORM: Both sides claimed good wins in the opening round �the Blues 34-25 over the Crusaders and the Brumbies 21-15 over the Chiefs - playing smarter, more precise rugby than their respective opponents. Both played to an obvious plan and neither deviated much from the pre-game script, which made their efforts both commendable and watchable.

WHO'S HOT: Plenty of players on both sides had good opening matches. Despite his rather soft yellow card, Troy Flavell was impressive in all areas and was ably backed by the other members of the pack. The Blues scrum did enough to suggest it may have the Brumbies under the hammer on Saturday but the lineout work needs accuracy that was sometimes lacking last Friday. Isakela Nacewa made a fine fist of both first five-eighths and the goal-kicking in a standout display, while Tuitavake and Doug Howlett looked sharp. George Gregan played well for the Brumbies and Mortlock, as usual, was a rock in midfield. Julian Huxley controlled play through his long-kicking game but will need something different against a Blues side that will attack with ball in hand. Mark Chisholm and Alistair Campbell were good in the lineout but the scrum looked a bit shaky.

WE THINK: A tough game to call and either side could win without causing too much of a surprise. Each will see areas in the other's game that can be targeted and aspects of their own that need attention this week. As far as 'put up or shut up' is concerned, we think the Blues might just get home but there won't be more than five points in it.