This is it, elimination time in the Investec Super Rugby Finals, and the champions face the difficult task of beginning their campaign for three straight on the road in the knockout stages against the Brumbies, who were too strong the last time the Chiefs arrived.

Squad update: The Brumbies joint top try scorer for the year Robbie Coleman – shared with Jesse Mogg on seven - is the only change to the starting team, again coach Stephen Larkham is opting for stability and will rely on strong home support.

The Chiefs look to experienced Waikato veteran Dwayne Sweeney, the only change to the Chiefs run on side, with Tom Marshall moving to the bench from fullback; it has been a long time since coach Dave Rennie has been able to have an unforced hand at the selection table, the outfit is close to full strength for this do or die fixture.
A stable selection, anchored by Liam Messam and Brodie Retallick up front, would like to think they have the goods to challenge the Brumbies scrum but there are enough Wallabies in that area that will fancy their own chances.

Form: The Brumbies rollicking win against the Chiefs earlier in the season came off the back of two straight victories for the champions in 2012 and 2013, but those were in Hamilton. However while the ACT based franchise was impressive in their opening half of the season, they have won just three of their last seven so are wobbling ever so slightly.

The Chiefs have, almost against the odds, entered the Investec Super Rugby Finals Series despite having to climb up the qualifying table this season, denied home rights and having to play a Brumbies side that has won seven straight in their own backyard.
In the end eight wins and two draws were enough, but it was those two statement making games that ended the title holders regular campaign, beating the Hurricanes 24-16 and the Blues 11-8 – no New Zealand team will win the crown without conquering their own backyard.

Key players: The Brumbies will look to a swathe of excitement and size in their backline, a pseudo Wallabies selection for the future, Matt Toomua’s game grows constantly while Henry Speight and Joe Tomane give the hosts punch that they haven’t really seen since the Joe Roff era.

The Chiefs need their pack as a whole to stand up, Liam Squire and Tanerau Latimer are the two workhorses who will need to lift against a very professional opponent.

Key matchup: Aaron Cruden will again be key, it has become overused to suggest his vital importance to the team, but his mastery of guiding the side around when on song is unique, and it appears slowly but surely he is getting back to his peak.

But it will be Nic White’s battle with Tawera Kerr-Barlow that will be potentially game changing, the two halfbacks play a different game but the kicking prowess of the Brumbies nine will be matched with the aggressive sniping of his Chiefs counterpart. 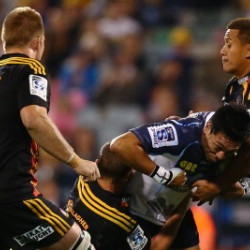