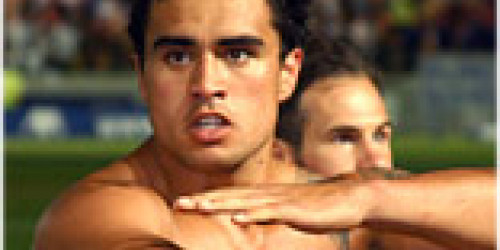 In the last couple of Rebel Sport Super 14 meetings the Chiefs have failed to take two winnable matches, both times at Canberra.
In 2007, at Hamilton, they must again be eyeing this as a match that can be won, but do they have the belief to get over the line?

WALKING WOUNDED: Sione Lauaki has been confirmed as having suffered a broken wrist in the Blues pre-season match, but Liam Messam is more than adequate as a replacement. Richard Kahui was still not 100 percent after injuring his shoulder against the Hurricanes. Brumbies hooker David Palavi continues to be in the wars, although the neck injury he suffered in a scrum collapse against the Waratahs is not as bad as first feared. Daniel Heenan is out or a while and Stephen Larkham has not travelled with the team, as he has missed recent matches and training to be with his wife at the birth of their daughter.

FORM: The Chiefs claimed two pre-season wins over New Zealand teams, beating the Hurricanes 31-17 and the Blues 24-21. The Brumbies lost to the Waratahs 0-12 and drew 28-28 with the Hurricanes last weekend. It�s hard to say exactly what this means, as the Chiefs have started the last two seasons a month after everyone else and the Brumbies all but made the playoffs last year when many had written them off.

WHO'S HOT: The Brumbies will be looking to the tried and tested old reliables in the side; it�s hard to escape the feeling that their fortunes will ride, in a large part, on Stirling Mortlock's shoulders in 2007. George Smith, as ever, will be a dominant force in the loose and Mark Chisholm, Mark Gerrard and Clyde Rathbone will be asked to perform to a consistently high level. The Chiefs need Stephen Donald to be on top of his game and to provide a sound goal-kicking option while Jamie Nutbrown's form, after a strong Air New Zealand Cup, will be worth watching. Tom Willis will be a key man, especially at lineout time where his locks are not the tallest, so accuracy will be paramount.

WE THINK: This is a tough match to pick and both teams will regard it as one that must be won for their playoff run to gather early momentum. We think the Chiefs can go well in 2007 � surely they won't be allowed to blow three starts in a row � and for that reason tip the home side by a narrow margin (no more than seven points) at home.