If asked three weeks ago, most would have picked one team to go into this Investec Super Rugby match on the back of an ugly loss and one with a tidy win under its belt, but few would have suggested the Blues would be the ones with the good win.
And the Crusaders have heard all about it all week.

WALKING WOUNDED: Crusaders loose forward Kieran Read will not play after suffering a pelvis injury at Melbourne. Luke Whitelock (head knock) is also out, so Richie McCaw will go back to No 8 with Matt Todd on the openside. Tom Taylor (mild quad strain) is also ruled out, although Daniel Carter was likely to move to first-five anyway. There have been other backline changes but these were optional and see regulars Israel Dagg and Andy Ellis returned to the run-on XV. You have to wonder what's going on with the Blues front row; a week after getting Tony Woodcock back surprisingly early from a calf strain and with Keven Mealamu still benched due to one, Charlie Faumuina is likely to miss the next six weeks after suffering the same injury last week. Apart from that, Pat Lam tinkered with the loose trio but made no other personnel changes.

Even if they had been really impressive only once in the last month, the Crusaders were travelling along nicely until they hit Melbourne last week. There they ran into an unexpected check, losing to the Rebels as convincingly on the field as they did on the scoreboard. Apart from 20 minutes immediately before halftime, the visitors were chasing the game and a second-spell shutout (while the Rebels piled on 18 points) meant they left with nothing; although the Crusaders remain in the top six, a number of other teams are now a lot closer than was the case a week ago.

The Blues, on the other hand, finally had a win to celebrate although it was hardly vintage stuff. The match, against fellow cellar-dwellers the Lions, saw almost twice as many turnovers (54 in total, 22 by the Blues) as points (28) and neither team looked much better than their modest table positions suggested. The Blues did at least capitalise on a few chances to break a long losing skid and move off the bottom of the ladder, but that performance, while good enough to account for the Lions, still needs a lot of polishing if it is to trouble the better teams.

WHO'S HOT: Probably the hottest guy in Crusader land last week was coach Todd Blackadder, whose blood would have been at about 1000 degrees after his team's very ordinary showing. It's hard to think of one player who won his personal battle in Melbourne, although Sam Whitelock did have his moments in the first spell and Tom Taylor kicked for goal with the accuracy we've come to expect. The most worrying thing was the lack of impact the big names had, which means they will have been feeling the blowtorch since arriving back in the dressing room.

The Blues were nothing special either, and a better team than the Lions would have given them a lot more stick. Making 22 turnovers is normally a good way to lose a match but if the opposition makes 32, you're probably off the hook. The scrum looked as if it was powered by a bulldozer when Tony Woodcock and Charlie Faumuina were on the park, but predictably fell away when both left within minutes of each other. Alby Mathewson looked sharp when he arrived as a replacement and his try was well taken, although the Lions probably had a case when they argued half the Blues pack was unbound. Still, Mathewson played to the whistle and that try killed the game as a contest.

WE THINK: The temptation is there to write last week's loss off as simply a Crusaders malfunction, but they haven't been particularly sharp (except for the odd match) all year. Tries have been hard to come by and the trademark counter-attacks don't have the teeth they used to. But the Blues, that win notwithstanding, impress even less and they are still making too many elementary errors for any except the most rabid fan to like them. Ergo, Crusaders by eight in this one. 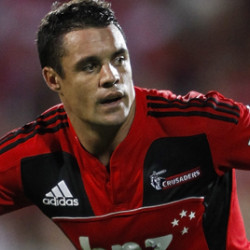