The Highlanders have a good home record against the Reds and it is hard to see that change this year.
The Highlanders need a win after faltering at Auckland last week and the Reds, hammered by an almost unbelievable injury toll, are just the team Greg Cooper would want to meet in these circumstances.

WALKING WOUNDED: Cooper lost utility back Craig Clare to a broken ankle last week but is able to replace him with Vilame Waqaseduadua. Think Reds, think props. Eddie Jones must pick from outside his contracted players because the last one standing (Rodney Blake) won�t be for long as he undergoes season-ending surgery. Greg Holmes is gone for the season with a shoulder injury, Ben Coutts also had shoulder surgery and the rest have been wrecked for some time now. Add Clinton Schifcofske (broken hand, 3 weeks) to that list and remember Hugh McMeniman and Stephen Moore are still out, so now might be the time for anyone who cares to spare Steady Eddie a thought. At least he gets Peter Hynes and Lloyd Johansson back in the midfield.

FORM: The Highlanders have battled in recent weeks although last Friday was the first time all season they failed to take at least a point. They beat the Force and Stormers, while their three losses are to the teams that sit 1-2-3 on the table at present. The Reds' season has been disintegrating with injuries, poor form, bad play and a host of other problems. They are value for 14th on the table at present.

WHO'S HOT: Without being unkind, nobody in either team is setting the world afire at present. There was much interest in Nick Evans' performance last week and it was OK, although he was never able to command the game. Jimmy Cowan did some sterling defensive work but couldn't make much of an impression on attack and the tight five were strong without dominating. The Reds simply cannot take a trick at present and have battled in each of the last four matches. But despite the team's problems, never-say-die types like David Croft and John Roe leave it all on the park every week.

WE THINK: If this match does not result in a Highlanders victory, everyone concerned from both teams should be swabbed. The Reds will give it their all but simply do not have the firepower required, although we are not necessarily convinced the Highlanders will post a cricket score. In fact, we'd drop our cash on a 1-12 margin at the TAB. 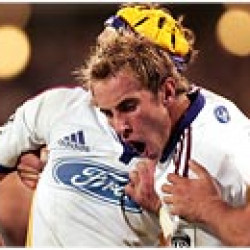