If the Hurricanes have the measure of one Australian side in the Rebel Sport Super 14, that team is the Reds.
The New Zealanders have not lost this clash since 2001, even if it has generally been tough, and look to add a sixth straight victory to that record on Saturday.

WALKING WOUNDED: All talk from Reds land has been dominated by the news that Chris Latham's Super 14 was over before it started and his loss is a massive one. Two players not considered by Eddie Jones this week were Lloyd Johansson and new first five-eighths Quade Cooper, after both were late for a 7am training run. The Hurricanes, who are missing six All Blacks for the first half, otherwise have a full squad to pick from.

FORM: The Hurricanes went winless in their pre-season matches, going down 17-31 to the Chiefs and playing a 28-28 draw with the Brumbies at Canberra. The Reds were thumped 9-38 by the Blues but beat the Highlanders 17-15 at Gold Coast last week.

WHO'S HOT: A lot of eyes in Australia will be focused on Clinton Schifcofske, who will be asked to spark some back attack for the Reds in Latham's absence. Berrick Barnes, who was lauded to the skies before last season but had a so-so year, now has a great deal of pressure on his 20-year-old shoulders at first five-eighths. The Reds pack, as ever, will be under the microscope. The Hurricanes will need to find forwards prepared to step into the breach caused by the All Blacks' absence; here no-nonsense types like Luke Andrews and Paul Tito are just the sort of players required. Jimmy Gopperth will want to be in his Air New Zealand Cup goal-kicking form from 2006 rather than his Rebel Sport Super 14 form and Ma'a Nonu has a season-long chance to prove he should be at the World Cup in a role other than as a midfield smasher against weak teams.

WE THINK: The Hurricanes need to win matches like this if their playoff runs of 2003, '05 and '06 are to be repeated. They have a good record at Brisbane (three wins in the steamy Queensland heat) and should get a fourth this weekend. The Reds threaten to be a serious wooden-spoon contender and anyone with realistic title aspirations must take at least four points off them. We tip the Hurricanes by 10. 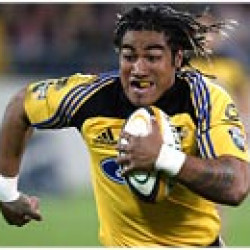