The Waratahs have claimed this Rebel Sport Super 14 game will not be a pretty match to watch, but whoever wins in Sydney is unlikely to have been concerned with the manner of victory.

WALKING WOUNDED: Loose forward Wycliff Palu had not recovered sufficiently from injury to be included on the Waratahs bench. Lock Paul Tito is the only notable absentee for the Hurricanes from the latter part of the campaign.

FORM: Two of the best teams in the competition, they have each suffered the end-of-season wobbles in recent weeks. The Waratahs suffered an unexpected loss to the Chiefs when their previously daunting defensive line was well and truly broken. The Hurricanes, after their loss to the Brumbies, stuttered to contain a fiery Reds combination. But it was a signal of the Hurricanes that the faults of their teams or yore were not revisited under the pressure and the win was secured.

WHO'S HOT: Waratahs first five-eighths Mat Rogers shone amid the carnage in Hamilton scoring a superb try. Flanker Phil Waugh continues to be destructive against most opponents, although it was interesting when he was up against Marty Holah. Chris Masoe, Jerry Collins and Rodney So'oialo will represent a tough test in the loose for the Waratahs. The contest between Lote Tuqiri and Lome Fa'atau, the competition's top tryscorer on their wing should be fascinating if conditions allow. The Hurricanes midfield of second five-eighths Tana Umaga and centre Ma'a Nonu should be another focal point in the game. Waratahs fullback Peter Hewat lost a little of the gloss surrounding him in recent weeks.

WE THINK: Was it a hiccup in Hamilton, or is something deeper at force for the Waratahs? Have the Hurricanes lost it, or is there more left in the tank? This should by all rights be a close contest and while both are in the semi-finals, the winner can be assured of a home semi. The Hurricanes have the sort of attack capable of testing the Waratahs' defences so the visitors could be set for a win. 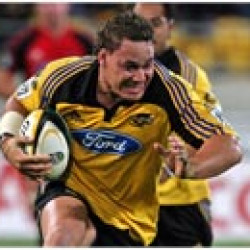