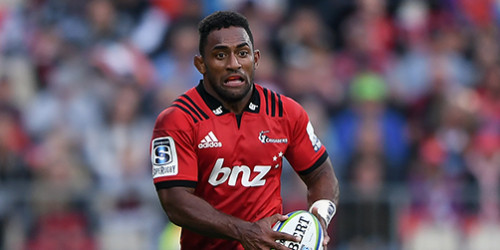 A three-try haul for wing Sevu Reece in the Crusaders' win over the Bulls in Pretoria lifted him to second place on the Investec Super Rugby try scoring list for the season and gave him a boost up the Rookie Watch ladder.

Here's out three standout rookies from round 13:

1: Sevu Reece (Crusaders)
It was another big day out for Sevu Reece on the wing in Pretoria, scoring three tries. But he made 80 metres from six carries during the game while also contributing to the defensive effort with five tackles, while also beating three defenders and making three clean breaks.

2: Harry Plummer (Blues)
Forced out of the game with an injury late in the first half, first five-eighths Harry Plummer set the tone for the Blues in their strong first half, several times taking the ball to the line while also kicking with effect. He made nine carries and nine passes as the Blues applied the pressure on the Hurricanes.

?? We can't say we weren't expecting this from @leighhart70. After studying all the round 1?3? action, Leigh Hart has selected his form #SuperRugbyXV. What do you think?