A Crusaders youngster proves his worth, Laumape comes of age for the Hurricanes, Henry Speight shows his class and more.
CHIEFS STAY TOP
The Chiefs will be feeling pretty satisfied heading into a bye this weekend. After taking out the Highlanders, Blues and Hurricanes in three consecutive New Zealand derbies, the Dave Rennie-coached side found things a little harder than they might have expected against the Rebels. Trailing 11-7 after 65 minutes, the Chiefs flexed their attacking might in the final quarter with three unanswered tries to wrap up a bonus point 27-14 win. The win keeps the Chiefs at the top of the overall Super Rugby standings with 19 points from four games.

After transitioning from rugby league in 2016, blockbusting Hurricanes second five-eighth Ngani Laumape is fast proving himself as one of the most influential mid fielders in the competition. Against the Highlanders, Laumape showcased his full range of skills and crossed for two tries in a sublime performance. His first try was down to superb positional play and speed as he latched onto a Jordie Barrett cross-kick to score. His second was an incredible individual effort as he beat the first line of defence with a swerve and pace before running straight over Ben Smith to score. If Laumape continues his great form he could push for higher honours in 2017.

LIONS ROAR
Last season’s finalists the Lions showed that they will be a force again in 2017 with a 44-14 thumping of the Reds. It has been a slow start to the season for the Johannesburg-based side but on the weekend they showed the kind of form that carried them all the way into the final. Wing Courtnall Skosan benefited from the Lions silky attack by crossing for four tries outwide. Despite the victory, the Lions are still behind the Jaguares in South Africa conference 1.

HUNT ON THE RISE
There was great alarm when Crusaders first five-eighth Richie Mo’unga went down injured in round one but Mitchell Hunt has slotted seamlessly into the jersey. After nailing a match-winning penalty to sink the Reds in round three, Hunt was in on the act once again versus the Blues on the weekend. With the match in the balance, Hunt showed great courage to burrow over and give the Crusaders the advantage. With three comeback wins in three weeks secured, the Crusaders will be brimming with confidence knowing they are never out of a contest.

SENSATIONAL SPEIGHT
The Brumbies have shot to the top of the Australian conference on the back of a Henry Speight double against the Waratahs. Missing a number of players from their 2016 squad, the Brumbies were expected to struggle in 2017 but have instead made the early running in 2017. On the weekend, it was Henry Speight who impressed with a sensational double after the Brumbies pack had laid the platform.

#STATCHAT | Here are the cumulative stat leaders for round 4 of the Investec #SuperRugby competition!
Who do YOU think deserves a mention? pic.twitter.com/4ZHBdOvqUN— Super Rugby (@SuperRugbyNZ) March 19, 2017 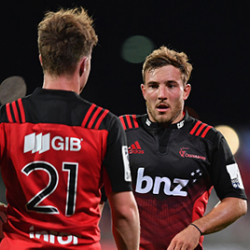