Sharks prepare on back of 'best 20 minutes' 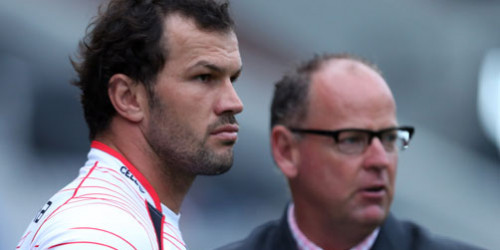 Sharks coach Jake White praised his side's comeback to beat the Highlanders to secure a Super Rugby semi-final against the Crusaders saying they produced 'some of the best rugby we played all season'.

The Sharks had to twice come from behind to secure the win 31-27 after the Highlanders had produced some stunning rugby of their own to rock the home team in Durban.

The win has the former World Cup-winning Springboks coach happy heading into the AMI Stadium clash with the Crusaders on Saturday.

"I think when you get a win like you did last week with 34 points and then 31 against the Highlanders, it's a great way to take momentum into the last couple of rounds," White said after the game.

"Ideally you want a comfortable win, but when you get to this stage of the competition, it's highly unlikely. It's a great lesson for all the boys here to understand just how tough this knockout stage is."

White rated the Highlanders as 'probably' the best team in the competition to counterattack from broken play.

The Sharks suffered a blow in losing lock Anton Bresler due to a rib injury. However, Stephan Lewies, who had been forced to pull out ahead of the play-off game, was likely to be fit.

While happy to claim the underdog status for the semi-final, White said when looking at the play-off requirements: "All the talk about home ground advantage and experience being what it is all about might mean anything because a team can buck the trend on a given day."

He pointed to home team Brazil's 1-7 loss during the World Cup as an example of what was possible.

"I find it encouraging that so many of the players in the Sharks team have had experience of playing Test rugby in South Africa. It's going to be like a Test match, and we almost have a Test team at present," he said.

"Because of the pressure that comes with play-off rugby, there will be less running from the 22, fewer chip kicks, and of course because there is no four-try bonus point on offer that also means teams tend to take few risks.

"It's about being game ready, about how you manage to get out of your own half, and taking opportunities when they come your way. There are only two or three opportunities to score in a play-off game and you need to take those," he said.

Meanwhile, the Crusaders are expected to name All Blacks captain Richie McCaw on the blindside of their scrum for the game.