Stormers confident ahead of Crusaders Sitting on the bottom of the South African Super Rugby Conference, the Stormers are still within five points of the leading side, the Sharks, and going into their weekend game with the Crusaders they have the advantage of a game in hand.

Knowing they also have the benefit of three home games, the pressure was not as great against the top team in the competition, as it would be for a team like the Bulls who are embarking on their Australasian tour.

Centre JJ Engelbrecht told supersport.co.za: "It is not make or break for us yet, but it will be important for us to get in a good performance to set up a good run through the remaining four matches that will enable us to challenge for a place in the playoffs.

"Maybe in another year it would be make or break time for us already, but this year has been so odd, and the log so tight, with the teams being so up and down and messing up everyone. So even if we lose on Saturday we will still be in it."

The Stormers were taking a positive approach into the game. They were refreshed coming off the bye and were confident of handling themselves well against the Crusaders.

"We know it is the biggest challenge of the season so far but looking at the log, and what a win will do for our confidence, this is also a game where we can take a great step in the right direction," he said.

Instead of looking what the Crusaders managed on the road against the Bulls at Loftus Versfeld last weekend, the motivation for the Stormers was from what the Sharks did a week earlier in Christchurch.

"We thought the Sharks got it right against them where they played very well to draw the game.

"The Sharks' defence was brilliant in that game and we have taken some heart from what they were able to manage to do," he said.

The Stormers were given a lesson in Christchurch in 2017 when the Crusaders' defence overpowered them resulting in a heavy 57-24 defeat but Engelbrecht felt the Stormers were better equipped to deal with the linespeed of the visitors.

"Most of the teams now apply press defence so it is becoming easier for everyone to handle as we are becoming more used to it," he said.

One advantage Engelbrecht has over his teammates is knowing what it means to be a part of a team to have beaten the Crusaders, something the Stormers haven't done since 2010. He was part of a Bulls team that beat them in Pretoria before beginning his stint with the Stormers. 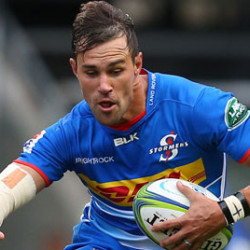