Showing better decision-making, especially around off-loading options, would be a goal for a rejuvenated Chiefs team when they meet the Reds in New Plymouth in Investec Super Rugby on Saturday.

Coach Dave Rennie said with so many players back and available for selection it felt like they had three teams at training on Tuesday. And that was valuable given the tough period they face following their bye next week.

QUICK TAP: HURRICANCES ARE YET TO PLAY BEST RUGBY - PERENARA
They will play the Crusaders in Fiji, the Blues in Auckland, the Waratahs in Hamilton and the Hurricanes in Wellington before the June break.

"It certainly makes training more intense and there's a lot more competition for places. We've got ourselves into a pretty good position on the table. We're not firing as we want to but the key to winning this competition is having momentum and playing your best footy at the end of the year so that's what we're working towards," he said.

Heading the players returning from injuries was second five-eighths Charlie Ngatai who has fully recovered from concussion, and who played 80 minutes of club rugby at the weekend.

Rennie said he had worked hard to get himself back in shape and he was delighted for him because before his injury last year he felt he was the best player in Super Rugby.

Halfback Tawera Kerr-Barlow is also set to return relieving some of the stress on the position for the side. Utility Tim Nanai-Williams was another coming back while Johnny Faauli was off suspension and in the forwards lock Michael Allardyce and hooker Nathan Harris were back as well.

It is timely for the side as they attempt to recover the early form they showed but which had tapered off in recent weeks.

New Plymouth is set for #SuperRugby action when @ChiefsRugby host @Reds_Rugby this Saturday. 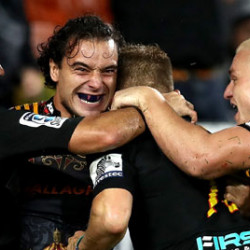