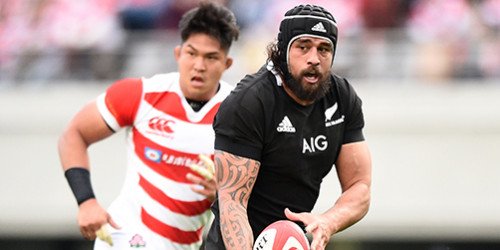 With the Investec Super Rugby season steadily approaching, check out five Highlanders who performed strongly on the International stage in November.

QUICK TAP: FANS TO DECIDE BEST TRY OF 2018
Ben Smith
Games played: All Blacks vs Australia (Yokohama), All Blacks vs England, All Blacks vs Ireland
The scoop: Ben Smith had a big workload on the right wing for the All Blacks with 80-minute performances against Australia, England and Ireland before earning a well-earned rest for the final Test of the season against Italy. The 32-year-old outside back showed he still has plenty of pace left in his legs with a 50-metre runaway try against Australia in Yokohama. While the two Tests against England and Ireland didn’t offer many scoring opportunities, Smith was steady under a high ball assault from both teams and solid on defence. A shift back to fullback is likely for the Highlanders with Waisake Naholo and Tevita Li poised to form a lethal back three partnership with Smith.
Points scored: 5 (one try)
Rating: 7.5/10

?? Here are five @Highlanders players you are going to want to keep an eye on in the 2019 season!

Liam Squire
Games played: All Blacks vs Australia (Yokohama), All Blacks vs England, All Blacks vs Ireland
The scoop: The first choice All Blacks number six, Liam Squire had a solid Vista Northern Tour for the All Blacks with his hard-running and punishing defence to the fore. Squire opened the scoring for the All Blacks on tour by crossing early in the 37-20 win over Australia in Yokohama and was in the thick of the torrid forward battles against both England and Ireland. After a punishing season on his body, 27-year-old Squire will be looking forward to recuperating over the Christmas break and continuing his high-octane style of play in what promises to be a huge 2019.
Points scored: 5 (one try)
Rating: 7/10

?? Are your ready for your #SuperSummer to kick off? Check out all the pre-season match venues for early 2019!