New Zealand sides have well and truly overcome any lingering contention that they were disadvantaged when playing at altitude in South Africa after the latest round of games in Investec Super Rugby.

The outstanding Highlanders' last gasp assault made a nonsense of the so-called advantage South African teams enjoyed on the high veldt. That element has been taken out of the game as a result of greater exposure and it would appear to a large extent the travel factor has also been reduced by the manner of the Highlanders' win.

New Zealand Conference
They will still be wondering in Bloemfontein how the Cheetahs let their advantage slip to the Highlanders. It won't be any comfort that they have so little time to think about it before getting on a flight to play the Blues in Auckland on Friday.

It was an outstanding effort by the Highlanders and helped ensure their chances of a play-offs berth.

The Hurricanes increased South African misery with their 41-22 win over the Stormers in Wellington, the fourth successive loss for the Stormers and the last game in a miserable tour of New Zealand. The Hurricanes may not be quite as clinical as when at their best but they are not far from it.

The Chiefs looked more like them old selves in dealing with the Reds 47-17 in New Plymouth and with their stocks of players being replenished there is a more formidable look to them. Charlie Ngatai's return made a noticeable difference to the backline.

The Blues' first half against the Waratahs was indicative of improving cohesion but the second half was a reminder that they still need to keep a foot firmly on the throat of opponents in their 40-33 win which really wasn't as close as the final margin suggests.

But there was no doubting the Crusaders superiority in their 62-24 win in Pretoria. There wasn't only a gulf on the scoreboard, it was evident on the field with poor structure in defence allowing the competition favourites to run the home team ragged.

Australia Conference
No wins at all for Australian sides about sums up where their game is at after 11 rounds. The closest anyone got to their opposition was the Waratahs who got a loser's bonus point against the Blues. However, it was all consolation stuff for a side that paid the price for first half indiscipline and lack of love for the ball.

The Rebels were not good enough against the championship contenders, going down 10-47 to the Lions in Melbourne, a fact conceded by coach Tony McGahan.

The Reds had some cause for hope against the Chiefs but again were totally out-played by a home team regaining its mojo and in no mood to ease up on punishing mistakes by the visitors.

The Waratahs, a team from a city that has given so much to rugby innovation over the years looked well short of ideas when going down 33-40 to the Blues in Sydney. Unable to respond to the clamps the Blues put on them in the first half which they ended down 0-26, they were never in the hunt in spite of a second half revival.

And in Durban the Sharks were unprepared to concede any ground to the Force who lost 12-37.

Africa Conference 1
In spite of their 22-41 loss to the Hurricanes, the Stormers still have the benefit of their six-game unbeaten start to the competition to be well clear on the points table.

That was helped by the second-placed Bulls being humiliated 24-62 by the Crusaders in Pretoria. The Stormers sit on 26 points, and the Bulls 14.

The Cheetahs had their chance for their third win but were unable to deny the Highlanders at the death and went down 41-45.

The Sunwolves ended their tour of New Zealand and Argentina with a loser's bonus point in their 39-46 loss to the Jaguares.

Africa Conference 2
The Lions remain the one constant force in the African conferences and they consolidated that with a 47-10 win over the Rebels. The Sharks are within touching distance 10 points back on 32 points after their 37-12 win over the Force.

The Jaguares gained five valuable points with their 46-39 bonus point win over the Sunwolves in Buenos Aires. It lifted them to 25 points. 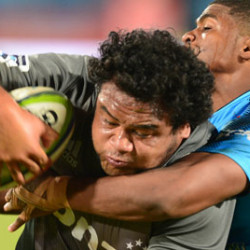