Regaining sole ownership of the lead on the Investec Super Rugby points table, five points clear of the Hurricanes on 19 points, the Crusaders demonstrated they were back on winning track in week seven play.

The Bulls also recovered their momentum to move to second on the South African ladder, one point behind the Lions while the Rebels, after their win over the Reds, and the Waratahs loss of their game with the Sunwolves are back on top in Australia.

QUICK TAP: CHIEFS MAKE IT TWO ON THE ROAD IN BUENOS AIRES
If the playoffs were held next weekend the draw would see: the Crusaders play the Blues, the Hurricanes against the Bulls, the Rebels against the Waratahs and the Lions against the Sharks.

New Zealand Conference
Beware a chastened Crusaders side. That's become the Super Rugby mantra and it was the Hurricanes who found out about it again when beaten 8-32 at home in Wellington on Friday. The loss brought to an end the 13-game winning home run for the Hurricanes and while their forward pack largely stood up under the pressure it was the power and determination of the visitors to give the dangerous Hurricanes backs no room that was crucial. That resulted in risks being taken by the home side with a subsequent error rate that only fed the Crusaders' desire. Four tries to one, a bonus point win, told the difference between the sides and left plenty for the Hurricanes to think about.

Pushed hard by a Stormers side who enjoyed dominance of possession, the Blues utilised their outstanding defence to set up a deserved 24-9 win at Eden Park on Saturday. While there were elements of flash and dash in the Blues' play, it was more the graft of their pack and the commitment to the tackle across the field that brought reward for the side. The Stormers tried to move the northerners around but without effect, rather it was the visitors who succumbed to tiredness with the odd warning from the referee to get play going during a string of 'injury' breaks. Lock Patrick Tuipulotu led the way for his pack with a big game while there was danger littered throughout the backline.

If ever the requirement to chase everything in rugby was borne out, it was evident when Chiefs centre Anton Lienert-Brown charged down a vital Jaguares clearing attempt in their in-goal area to force a vital scrum which produced the match-winning try to halfback Te Toiroa Tahuriorangi two minutes from the end in the 30-27 win Buenos Aires. This was a game the Chiefs nearly let go but by digging deep they got themselves back into the game to nullify the fine kicking game of the home side to secure a second win on the road that has set them up nicely for the remainder of the competition, after enjoying their bye next weekend.

Australia Conference
From the heights of a win over the Crusaders last week to the depths of a 29-31 loss to the Sunwolves was the Waratahs' fate in Newcastle on Friday. It has already been clear that the Sunwolves side of 2019 is a different proposition from that of earlier years and the Waratahs found that out when their casual display opened up opportunities that the Sunwolves, and wing Semisi Masirewa especially, were only too happy to take. He scored a hat-trick with his speed too much for the Waratahs' defence to handle. Also crucial to the outcome was the continued goal-kicking success for first five-eighths Hayden Parker.

Tries either side of halftime were enough to give the Rebels winning momentum in Brisbane where they beat the Reds 32-13 on Saturday. The game had been billed as Rebels' five-eighths Quade Cooper's chance to thumb his nose at his former side and he didn't let them down, producing a well-placed kick just before the break for wing Jack Maddocks to secure the ball and score. And then after the break it was halfback, and former Red, Will Genia who created a chance which Anaru Rangi took to get his side out to a 16-6 lead. The home defence kept the Rebels out for long periods but after prop Taniela Tupou scored, the Rebels found new rhythm and they secured a late try for a bonus point win.

South Africa Conference
If success in rugby is determined by catching the opposition by surprise the Stormers gave it every chance but ultimately came up short when losing to the Blues 9-24. Blues coach Leon MacDonald said it had been the fastest game the side had played so far this season and it needed a superb tackling effort to contain the Stormers. Where the difference came was in the clarity the Blues were able to create when try scoring chances were on. The Stormers were completely unable to utilise their driving maul, and it was only in the final moments that they were able to kick to the corners in an attempt to reduce the margin. But again, they committed errors under pressure and the Blues got the win.

There was little pretty in Durban where the Bulls beat the Sharks 19-16 courtesy of a Handre Pollard penalty goal two minutes from the end. It was a tight contest all the way, marred by a double sending off of hookers Armand van der Merwe for the Sharks and Schalk Brits for the Bulls. Mike Fraser sent both off after they indulged in a fight. The Bulls led 6-3 at halftime but the Sharks scored just after the break when No.8 Daniel du Preez scored. But the Bulls roared back when centre Jesse Kriel score. Ten minutes were left when Sharks centre Andre Esterhuizen levelled the scores at 16-16 but a massive scrum shove on a Sharks feed won a penalty for the Bulls and Pollard did the business.

A tactically astute kicking game pulled the Jaguares back from a 6-20 deficit early in the second half to lead the Chiefs 27-23 with eight minutes remaining in Buenos Aires. But the Chiefs found a way to turn the pressure on the home team and an in-goal chargedown by Anton Lienert-Brown gave the Chiefs the sniff they needed from the resulting five-metre scrum. In the long run, however, it was indiscipline earlier in the game that allowed the visitors to get out to such a significant lead and, ultimately, the Jaguares paid the price. 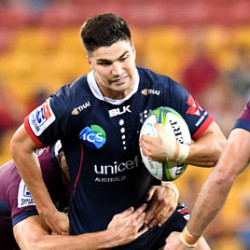