Highlanders' power, albeit distributed from their home base in their first three Investec Super Rugby games, has the volts running through New Zealand rugby.

Their 25-17 win over the Crusaders has them on top of the New Zealand Conference and in third place on the overall points table, with the Lions on top on 19 but two games ahead in games played.

New Zealand Conference
The test will go on the Highlanders when they head to Wellington for next weekend's game but they have made a powerful start to their season, demonstrating that their teamwork and inventiveness make them a side who can never be under-estimated while their defensive screens have been been sound.

When it comes to stepping up in the face of adversity, especially injury concerns, the Chiefs are the champion side of them all. They have done it for many seasons and it was a measure of their composure that they were undaunted when the Bulls got out to such a big lead on Friday. The final score of 41-28 may have been inflated by a last-minute try but the Chiefs mettle was there for all to see.

It was back to reality for the Blues who struggled to get into their game in Cape Town and assistant coach Alistair Rogers was on the money when he said at halftime they needed to switch on. They did better in the second half but they paid the price for the lack of consistency of effort, something that coach Tana Umaga is trying to drum into the side.

Next week sees the Crusaders host the Bulls, the Hurricanes play the Highlanders while the Sunwolves will host the Chiefs.

Australia Conference
Under-performing in their earlier games, the Brumbies secured a much-needed win heading into their bye weekend when beating the Sharks 24-17 in Canberra. The South Africans were exposed by the home team's desperation and were forced into errors that allowed the Brumbies to call the shots in the vital stages.

The Reds made light of their travel to Buenos Aires to deal an 18-7 loss to a Jaguares team who would have been looking to build on their win over the Waratahs. But it's not possible to win when making the number of mistakes the home side made and Brad Thorn's men needed no second invitation to capitalise. They are sitting nicely in the Conference with confidence climbing.

The Sunwolves came close to pulling off the upset of the competition this season when going down by two points 38-40 to last year's finalists, the Lions, in Johannesburg. It was a good effort by the Tokyo-based side and while they remain on the bottom of the Australian Conference they provided a hint of what they were capable of given opportunities.

The Waratahs lifted themselves into third in the Conference with their 51-27 win over the Rebels. It was the first loss for the Melbourne side this year and puts a brake on the points table. The Sydneysiders got back up after their loss to the Jaguares last week and while they sit out the bye the Rebels will need to beat the Sharks if they are to maintain their points lead.

Next week sees the Rebels host the Sharks, the Reds face the Stormers in Cape Town and the Sunwolves host the Chiefs.

South Africa Conference
The Bulls may have lost out to the Chiefs in Hamilton but they demonstrated their capacity for playing positive, attacking rugby and are laying the foundation for a side capable of contesting with the best in the future. First five-eighths Handre Pollard appeals as the ideal player to provide his talented outsides with a quality of ball that has become accepted by New Zealand sides.

Opportunity lost may come back to haunt the Sharks when they failed to pressure the under-performing home side the Brumbies in Canberra, going down 17-24, this against a side that twice had players in the sin-bin. But the Sharks' indiscipline allowed Wharenui Hawera to land four penalty goals which proved crucial in the end.

Have the Lions got issues with complacency? That had to be the question after their loss to the Blues, and then when having to hold out the Sunwolves 40-38 in Johannesburg. Two home tries in the final quarter proved enough to get the win but there is some serious thinking ahead for the Lions after their games against some of the competition lesser lights.

The Jaguares appear their own worst enemies as their errors compounded chasing the Reds 11-7 lead at halftime. Playing catch-up rugby the Jaguares were forced to chance their arm and the mistakes in doing that allowed the Reds to tie things up especially after Filipo Daugunu scored for the Reds in the eighth minute of the second half.

Next week the Sharks will play the Rebels in Melbourne, the Stormers will host the Reds while the Lions will be in Buenos Aires to play the Jaguares. 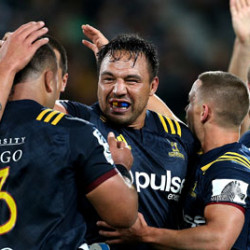